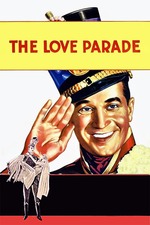 Chevalier's disgraced diplomat ends up married to the queen but wont stand for just being a consort.

It's a hard one to properly rate, there are reviews on here that have focused solely on the gender relations, or even possibly on the gender relations of the conclusion, and marked it right down. However I'm not entirely sure that's fair. Lubitsch had played with gender roles in a very sophisticated way as far back as 'I don't want to be a man' and would do so right through to Cluny Brown and for a long period of the movie it definitely felt like what the film was doing in highlighting Chevalier's frustration at just being an ornament was to comment on what women were subjected to all the time, some of the dialogue choices for what he objects to were too well chosen to be anything else but a satire. Macdonald does cave at the end, but she does so with quite a sly look on her face and making sure she inverts from the duration of when she should be subservient from dawn to night to from night to dawn. It is undoubtedly a climb down but it felt like it was mainly in service of her lust and a risque gag rather than any social commentary whereas Chevalier's frustration was definitely more pointed about wider issues. The movie, and undoubtedly Lubitsch, clearly does not have the same take on gender roles as we do in 2015 but his body of work including 95% of this one would suggest he didn't have quite the same take as society in the 20s and 30s either, it's more complicated than that.

That said it's definitely a movie that loses it's way at the end, something Lubitsch was still doing with similarly mismatched romances in Bluebeard's Eighth wife that similarly wastes a lot of it's comic opening act. The first 40 minutes have Chevalier be genuinely charming, smarmy sure but likeable and MacDonald genuinely sexy. So much so in fact that it made me want to go back and rewatch their other pairings where I generally found Chevalier very hard work. Maybe something has just clicked for me with him as I've really liked the last four of his movies I've seen after recoiling from him in his other lubitsch movies.

Here he is genuinely sexy but also self aware and funny. Self regarding to be sure but laughing at it more than in the next few Lubitsch musicals.

The music is generally good, albeit obviously in a 'coming from a long lost world' way and the support is decent with Eugene Palatte, Lupino Lane and Lilian Roth all getting some laughs. The plot is the usual ruritanian trifle with some but I think I possibly enjoyed it as much or more than the other Lubitsch musicals, but as I say something about the leads clicked for me and I'd like to go back and rewatch the others.

I was also impressed with the quality of the sound and the confidence in staging quite complex sequences that depended on it, it puts a lot of 1931 or even 1932 movies to shame in that regard despite it coming from the very dawn of sound.