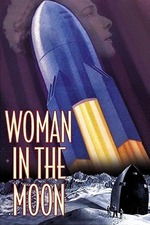 Woman in the Moon

A really hard one to review as there is no denying that it was more of a slog than Metropolis, Spies or Dr Mabuse, the unveiling and launch of the rocket seems to happen in real time, spectacular, scientifically detailed real time but still real time. But it was still enjoyable with a lot of real highlights, including that rocket launch, which shares so much with familiar real life 60s space race images that you get quite taken aback when you remember when this was made.

It's an intriguing piece of science fiction, there is a lot of time spent on pressure and the dangers of space travel, and the plot revolves around them having enough oxygen for the crew to return to earth but the moon itself is shown to have breathable atmosphere. It's a weird mix of science and pulp and by and large works as both. It is a bit too long but I'm someone who really gets fidgetty after the 90 minute mark and happily made it into the third hour here.

The characters are a little sketchily drawn, the model work seems to have taken priority but there is still a tenderness to some of their relationships and the ending lands just fine.

The scale of the model work, effects and sets is still amazing, the work needed for that rocket preparation and launch must have been incredible and I'd guess to an audience that didn't grow up on either star wars or the apollo missions they would have been even more so.

It doesn't have the depth of Dr Mabuse (although I think the talkie Mabuse has a lot more to offer in that regard than the silent one but I conflate them in my mind) or Metropolis and it doesn't quite have the energy of Spies but it's still Lang doing pulp with a budget and that's always good.

The Thief of Bagdad