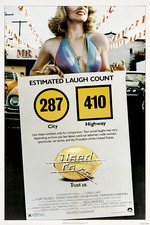 Early Robert Zemeckis comedy starring Kurt Russell, produced by Steven Spielberg, and co-written with Back to the Future scribe Bob Gale. It’s alright. Entertaining enough. An old fashioned 80s sex comedy in the vein of Caddyshack and National Lampoon’s Vacation though, humor wise not nearly as great as either of those two.

What impresses the viewer in this one is the nascent cinematic artistry behind Zemeckis’ involving camera movements and big action spectacles. There’s a lot of quite impressive car stunts in this, and Zemeckis really went above and beyond visually with this scrappy little film. Kurt Russell convincingly plays a slimy, fast-talking used car salesman and makes an enjoyable enough hero. Some fairly good writing in terms of setting gags up early on and satisfyingly/cleverly paying them off, something that Gale and Zemeckis nailed to perfection later in Back to the Future.