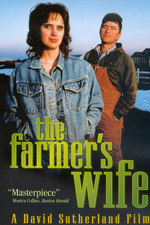 So if you're checking this one out you're either super old or followed a similar path as me:

1. Watch a really good PBS doc
2. "Gee, PBS have some great documentaries sometimes, and they're all free on their site!"
3. [Googles "best Frontline docs"]
4. Realise you've seen a lot of the best ones and a lot of the others are about major events
5. "...what the hell is the Farmer's Wife? it has amazing reviews everywhere it has reviews, but hardly anything post-2000 beyond a few on amazon?" (3 ratings in total on here)
7. "wait, it seems like David Sutherland had a pretty strong rep?"
8. "are all his films six hours long?"
9. "...Frederick Wiseman docs are all that long and generally rule, MAYBE I'VE FOUND ANOTHER WISEMAN?!?!?!"

Anyways, yes, 9.0 on imdb from several hundred ratings (not that the means much), placing it above some pretty damn good ones like Ghosts of Rwanda and the Gate of Heavenly Peace (which are both pretty great). Seemed like a bit of a public duty to check it out.

Can't say if it'd be as underwhelming for everyone else (growing up in the country maybe took away some of the more eye opening aspects of the toil and weird family dynamics) but yeah... not Wiseman levels of good, anyways.

It's definitely feels like there's absolutely no in-the-moment genuine footage of high tension with a lot of stuff being left unsaid or understated... I can't say I really got to know any of the characters.
On top of that, everything is shot in a very dry and matter of fact way that feels very "1990s TV documentary", as if the goals of each shoot were set out in advance of doing them with no room to deviate.
It seems pretty obvious Sutherland respects the participants a lot but his fly-on-the-wall approach feels as if they're actively straining to avoid making any kind of opinion or statement on anything.

There's some solid content and the six hours of them fighting to stay afloat, needing to constantly rely on something they've no control over falling exactly into place, certainly has some kind of resonant impact over the six hours but yeah... underwhelmed.
If you want something to play in the background for 6 hours though, there's definitely enough to keep you semi-engaged.

His next two look a lot more interesting so I'll probably check them out?

[NOTE: Only reviewing because no one else has, feel free to ask me some questions, I'll probably be clearer about my issues on it]

The Gate of Heavenly Peace