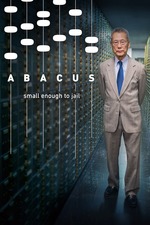 Too big to fail, small enough to jail. So is said about the fact that the only banking institution to be taken to court in the wake of the 2008 financial crisis was a small, family run bank that catered to the Chinatown community. It is the Sung family, owners of Abacus Federal Savings who fight the charges in a five year legal battle against Manhattan's District Attorneys. The title makes the intent clear: that this was an act of scapegoating rather than a legitimate pursuit of justice.

That is what's supposed to be taken away from the film and Steve James (Hoop Dreams, Life Itself) does a good enough job distracting from the murky nature of the trial itself. The amount of time spent with the Jung family gives a strong human element. Unfortunately what is truly interesting are the many questions of right and wrong the film hints at. The opening of the film sees Abacus founder Thomas Sung, 80 years old at the time of filming, watching It's a Wonderful Life with his wife. Already, as clear an indication as any that the fly-on-the-wall ethos of Hoop Dreams has been deviated from, the M.O. shifted to something more overtly political.

Sung founded the bank in the 80s, seeing an opportunity in the Chinatown community he lived in for financial services, he set up the banks and provided loans for establishing businesses and starting mortgages. Then in 2010 managers noticed irregularities in the books and traced it back to an employee who was taking bribes. They reported the crimes an in turn the Manhattan District Attorney’s Office charged the bank and 19 of its employees for conspiracy in 2012. The DA accusing the Sung family and other Abacus managers of being aware of the criminal activity and encouraging it. The Sung family, and subsequently James' film, say no.

The most interesting ethical question about the film itself is whether Abacus becoming a scapegoat excuse any criminal wrongdoing? The film has a justifiable sympathy for the underdog, there's no question that the big boys should have been taken to court but why not the little guy? For as much time as the film spends in the courtroom, the case is quite confusing. How much of that can be attributed to the DA's poorly constructed case and how much of that is James?

The film even adopts an argument of cultural relativism in the case of how business was being conducted at Abacus, that notions of debt and repayment are not as clear cut in Chinese culture. For a bank whose mission was to serve the Chinese community why wouldn't it adopt those values as some interviewed in the film reason. And finally the argument is presented that these loans whose inceptions were legally shaky, which were then sold to Fannie Mae, eventually made Fannie Mae money so what is the big deal? This is strange territory for the film to venture as that same logic can be applied to those big corporations, if only their illegal enterprises had actually paid off.

What we have is an engaging reminder that in the world of finance there will always be those looking to get ahead, the norm is moral forfeiture. But the film doesn't want to venture wholeheartedly into the grey. It should want the viewer to feel uncomfortable once the credits roll, instead of the few who will always read a doc in the context of F for Fake or A Man Vanishes. James has a way to engross the viewer, this talent applied to something that knowingly tries to unease could potentially make for a definitive reflection on this sector of the United States. Still, it's thought-provoking enough even if it will get audiences to think they have a full grasp on the 2008 crisis as a whole without needing a full understanding of the specifics of this particular incident.