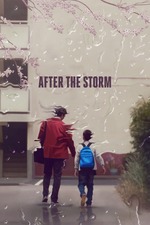 Kore-eda doing his take on the detective genre. That should be reason enough to go see After the Storm, both a spiritual successor to Still Walking for the Hiroshi Abe/Kirin Kiki pairing as son/mother and to his recent Our Little Sister for the strong presence a deceased family member might have on their family, sometimes a bigger presence than when they were alive.

Ryota (Abe) describes himself as an author though his first and only novel, an award winner, came out over a decade. He is divorced and only gets to see his son once a month, unable to afford the alimony payments after the evenings gambling at the bike races, the pachinko machines, and the lottery tickets. This midlife slump has him unable to finish his sophomore slump as a novelist. What he does for spending money is work as a small-time private investigator. What started as research for his next novel became a gig he settled into [extended side note: His boss is played by Lily Franky who is seemingly in everything now (not necessarily a bad thing). On top of that Kanji Furutachi makes a single scene appearance in this war of ubiquity.]. Mainly tailing cheating spouses and then offering said adulterer a chance to destroy the evidence for a fee, Ryota takes no pride in his work.

Most of his detective work however involves his private life: following around his ex-wife (Yoko Maki) as he spies on her new boyfriend. He's more there for his son than his family knows, showing up to baseball games where he watches form the parking lot with a pair of binoculars. His son Shingo is reminded of father's frustrating neer-do-well qualities when his potential father-in-law buys him a new mitt before his real dad can. He's a quiet kid who writes about his grandmother (Kirin Kiki) for school assignments and is hard on his father only because he wants to see him.

Still Walking touched on certain unspoken realities of family and the distance that grows over time between family members. It transcended the family drama genre by how easily it seemed to hit on these finer points. It was incredibly mature and understated work. After the Storm pairs perfectly with it as it accomplishes this in a much different way. The film's music, a theme entitled "Deep Breath" by Hanaregumi, is softly whistled throughout the film. It gives the impression that this is lighter Kore-eda and in a sense this is true but like Air Doll a certain premise or tone does not form a blockade against the sort of nuances of family he is interested in. Kore-eda is the festival darling who can do no wrong and with each picture it's astounding how true that is.

Viewing After the Storm under the checkmarks of a detective yarn yields some surprising similarities - again this is the most fun we've seen Kore-eda. Ryota, with the help of the impending typhoon mentioned throughout the film and his mother, cons his ex-wife and son into spending the night at his mother's with him on the pretense that it's too dangerous to go home after picking her son up from the modest apartment her ex-mother-in-law dwells. Ryota and his mother accomplish this separately, without conspiring, a shared deception. Something so inherent to the webbed nature of a detective plot gets a more humane spin by Kore-eda with a tone and stakes reminiscent of The Sting.

Hiroshi Abe deserves mention as he gets a lot out of this character who I imagine would be more annoying or more sentimental played by most others. His justifications for his way of life draw what seems to be true laughter from his investigative partner (Sosuke Ikematus). He has the kind of chemistry with Kirin Kiki and sister Satomi Kobayashi that is not seen in family dramas enough. The kind that is familiar, where endearment or other mistakes of a rookie screenwriter to indicate blood ties is too commonly used in place of the actor's responsibility. Late at night when Ryota is snooping around his mom's place trying to find her stash of money, just one of the ways he resembles his late father whether he knows it or not or wants to admit it, he comes across a stocking. He excitedly unwraps it only to find two squares of cardboard and a note from his sister, sticking her tongue out. Kore-eda's cast doesn't even have to be in the same room together for this chemistry to come through. Family members don't even have to be there or even alive to still have a place at the dinner table and the day to day. It's a phenomenon that the film's original title states is even deeper than sea.