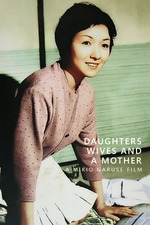 Daughters, Wives and a Mother

Daughters, Wives and a Mother 1960

If we accept the theory that there was some back and forth between Ozu and Naruse, a few interesting double bills emerge: 1955's Floating Clouds serving as competitive fuel for Ozu's Early Spring and Tokyo Twilight, his youth-focused, most rageful of his films; then between '61 and '62 there is a dual of the massive ensembles Daughters, Wives, and a Mother and Ozu's The End of Summer the following year. The Japanese marriage as depicted in these films finds a kinship in business partnerships rather than love affairs. They focus on multiple generations and the displacements and relocations brought about by matrimonial union and separation. What Naruse's picture has up on Ozu's is Tatsuya Nakadai playing suitor to Setsuko Hara. At this point now unnecessary, more thoughts on Naruse's film below.

Hara plays a woman widowed within minutes of opening credits' close. Since she had no children with her husband, the in-laws see no reason to maintain connections with her. She returns back to her family, along with a hefty amount of money inherited her husband's life insurance. It just so happens that the rest of her family, divided up into their own private pockets, are dealing with troubles which they believe can be solved financially.

The film doesn't quite do justice to its phenomenal cast. It's plodding with occasional moments of uncomfortable insights. As mentioned, Nakadai is a young wine entrepreneur but there's also Reiko Dan and Hideko Takamine. The prospect of Hara and Takamine makes this a must watch for those who conjure them on a nightly basis but they rarely interact in the picture nor have as biting of parts to play as Naruse gave them separately and elsewhere. Daisuke Kato, Chishu Ryu, Haruko Sugimura, and Ken Uehara (Hara's husband in two other Naruse films) also appear.

Any frank discussion of parental care and inheritance to be found in Tokyo Story is expanded on here as the titular mother's children have no shame when it comes to discussing who would bear the greater burden if they were to care for her. This is Make Way for Tomorrow in glorious TohoScope. Privacy, desire for an excess of financial comfort, and other concerns plague the household. And Hara happily doles out large chunks of her inheritance for those around her. As usual, she plays a character fully aware of the impermanence of all states. For now she enjoys her widowhood. The prospect of marriage (i.e. a man with an income) is there but doesn't loom over her like it does her siblings.

Hara is full-Madonna in this picture. Some of the most absorbing moments in the film are between her and Nakadai. Popular expectation of Hara would never allow her to fully indulge in romance but there are traces of longing to be found within each of their stares. When Nakadai takes her up to a friend's empty apartment she wants to try out an electric vacuum cleaner, for a few moments they play house. And briefly are they lovers when Nakadai has multiple attempts at planting one on her. But it is the matter of family, seen as a business, which will not allow her to follow this younger, more sincere path. She knows marriage as a transaction and accepts with a smile. Needless to say, there is enough material here for a full-fledged tragic romance between her and Nakadai. Unfortunately we get this multi-generational quilt that only occasionally is well-knit.