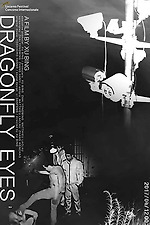 If you fake reality, then reality is fake. Coming off the lips of a monk it's laughable, but said by the film this "koan" is almost an admittance of wasted effort. For anyone who makes it this far into artist Xu Bing's foray into feature filmmaking Dragonfly Eyes, this could either be infuriating that all of this effort, traversing thousands of hours of real surveillance footage to assemble a story a girl who leaves a monastery only to be eaten up by the city, was for nothing. It's more so a provocative challenge to those who watched the film for its gimmick, who have chosen to ignore the thousands of realities in favor of the melodramatics Xu has applied to the footage. The actual lives who created the footage of suicides, violence, and city anonymity are relegated to subtext and are begging to be further explored. Xu lets his story - told entirely with voice over and onscreen text

Unlike Bong Joon-ho's 2004 short Influenza, in which the narrative is presented as surveillance footage, Xu's film openly applies fiction to actual surveillance footage. There's a sense that this is the most natural plot to come from the footage. Gyorgy Palfi with his Final Cut: Ladies and Gentleman, in which he uses clips from hundreds of films to tell a story, opted for that of a romance between a man and woman. It's timeless and one that can be derived from a great deal of works. This assumption that what occurs in the fiction of Dragonfly Eyes was induced by the footage itself, is successful and haunting.

The film seems to know its incredible aspirations and gives itself a few safety nets, one of them occurs immediately. We hear Xu Bing's voice describing his desire to make a film of this nature for a while, but it wasn't feasible until all of this footage was being live streamed and saved on a cloud. This is the important detail: the notions of privacy, fame, and connection. Unfortunately the film might not be able to shake its approach, especially when it calls attention to it.

Qing Ting is a woman with a plain face, not extraordinarily beautiful, gets a job at a dairy factory. The way she wonders about the feelings of the cows draws the attraction of engineer Ke Fan. She moves from job to job and he follows, developing an obsession and desire to protect that she didn't ask for. A run in with a rude upper-class socialite causes Qing Ting to lose her job at a laundromat. When Ke Fan confronts the woman who cost Qing Ting her job, things begin to escalate until he's in prison and she turns to plastic surgery for a new start and new career.

The majority of the film is narrated by Qing Ting and Ke Fan. The plot is progressed by these voice overs. Since it is written that both are average, different non-descript people "portray" these characters. The film does a successful job adding all the sound in post. The audio of conversations might betray the CCTV form, but it mixes it up from the voice over and gives the surveillance AI a greater ability for the invasive. The eponymous surveillance system is the other major player in the film. Seemingly voiced by Stephen Hawking, the Dragonfly Eyes keeps watch. It is able to categorize individuals based on gender and objects by type. Areas of interest in the frame are outlined in boxes by the AI. It picks out our protagonists from crowds, at one point it's even able to provide backstory to random people. A shot of a woman at a computer and a man looking over her shoulder. According to the AI she is having computer troubles at work and he is a coworker who has always had a crush on her, which is why he is helping. These are when the film is most inventive and engaging, when its scope is everyone in the field of view of one of these thousands of eyes.

During the story of Qing Ting and Ke Fan the film will sometimes evolve into montages, usually of violence. This is an instance of the film's form trying to break from the story. Footage used for the story eventually becomes distanced from its origins. These diversions are necessary as potential reminders that what we are seeing was not staged. Filmmakers opting for the style of found footage do so to achieve the effect these clips hold. But here it is anonymous. The distance keeps anything from coming off as warm.