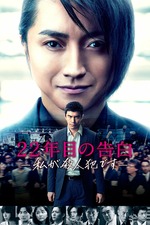 Memoirs of a Murderer

If memory serves, Irie's Memoires of a Murderer acknowledges Jung Byung-gil's original film before anyone involved in the remake gets credited. Packed away in the opening montage, an audio-visual foreshadowing of the social media burst said murderer becomes the center of, is a noise-filled, nth generation video of text citing the Korean film.

A serial killer publishes a memoir detailing the behind the scenes of his cases that went cold. Since they took place before the change in laws dealing with statute of limitations, the murderer is free to confess to these crimes without prosecution. He is met with controversy, acclaim, and eventually celebrity. Both films share the premise but the Japanese reworking forgoes succeeding as an action thriller in favor of an additional subtext.

Since his breakout works about wannabe rappers and underground punks, Irie's budgets have consistently gotten bigger. Memoirs of a Murderer along with his previous two have been sleeker genre works. He still continues the Saitama Rappers saga going with sequels and TV projects but remaking a popular Korean thriller made five years prior is another step as an established commercial presence.

Wataru Makimura (Ito) was assigned the case of a string of five killings in '95. Each case a witness was left alive by the killer, tied up and forced to watch as the murderer strangled a love one. The killer was never found and a close call left a scar running up the side of Wataru's face, whose sister was one of the five victims, his partner also being killed by an explosive trap left by the killer meant for Wataru. One death for each shoulder, the case had to be dropped as the clock passed fifteen years, surpassing the statue of limitations.

There are moments when the jumping back and forth between past and present happens so rapidly that the shifting amount of black to the sides of the screen seen in the corner of the eye, a result of the dual aspect ratios, works as a subliminal indicator of the shifts.

The absence of the over the top set pieces of the Korean original, such as two highway chases, actually make the twists of the film come off as goofier. Most of the action and crowd-pleasing elements of the original are eschewed in favor of a somber fulfillment throughout the film. In the original there was the murderer, the detective, the public at large, and the other surviving family of the victims who are plotting on their own to kidnap the murderer and get revenge unbeknownst to the detective. The multiple parties and the detective's internal conflict - he wants justice but must protect the killer from vigilantism - made the original an above average thriller. Its social critique has surprisingly become more relevant, but famous killers have always received love letters and fascination by the public.

What then truly differentiates Irie's film from Jung's is a stronger focus on survivor's guilt. Wataru's sister and her boyfriend move in with him due to the Kobe earthquake. She has become disturbed by her work as volunteer aid to the quake victims. Echoes of her guilt can be heard in the present. "Why not me?" is the universal question. Irie and co-writer Kenya Hirata drop the vigilante justice side-story to focus more on aspects of guilt, which begins to take on more prevalence in the film once we move away from book signings and social media to conversations between victims and killers behind closed doors. The 1995 setting is brilliant as it gives us the natural disaster to contextualize the feelings of the murderer's survivors and fifteen years later the statute of limitations for crimes resulting in the deaths of persons was abolished by the Diet. This is where the remake surpasses the original.

Despite being less entertaining than the original, Memoirs of a Murderer 2017 is arguably a more populist work, giving the outlandish thriller a backbone of a type of guilt still relevant to a society still in the wake of 3.11. The ridiculousness of the plot speak to the pathetic appeal its centered on.

For a more fun take on the statute of limitations Japan once had for murder check out Satoshi Miki's Jikou Keisatsu also starring Ryo Iwamatsu, a series which ran for two years and had a handful of episodes directed by Sion Sono.

A Whale of a Tale