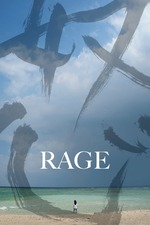 In Hachioji a married couple is murdered in their home. The crime scene is bathed in blood. The killer had dragged the bodies through the home, leaving the corpses in the bathroom. On a door 怒 is written in blood. Anger, fury. The deliberate and primal scrawling of the character make rage the more appropriate choice of translation.

As the case drags on with no headway being made, a new lead is found that the killer received plastic surgery after the murders. The police post composites of what his new look could be. Unlike Dark Passage, the guilty have gained a new appearance. Instead of looking to absolve himself, he looks to hide, and possibly reintegrate himself into another life with another future victim. In three different parts of Japan a quiet stranger resides. Scenes with the two detectives on the case start to die down as the audience is left to investigate, suspicious of the three strangers before the characters are.

In Chiba a father (Ken Watanabe) brings his daughter (Aoi Miyazaki) back home from a venture into sex work. It's not long before she starts to date the new guy who works at his harbor. In Okinawa a young girl (Our Little Sister's Suzu Hirose) moves to a small island with her mother. On a solo-hike she encounters a drifter (Mirai Moriyama) who asks that she not tell anyone that he has holed up in an abandoned home. And in Tokyo a successful, closeted man (Satoshi Tsumabuki) hooks up with a stranger (Gou Ayano) and invites him back to his home. Each story is of lonely people finding solace in blank slates before suspicions and insecurities creep in to break it down.

As the murder investigation takes a back seat, Lee finds other ways for it to peek into these developing relationships. Usually in the form of news reports broadcasting new information such as a row of three moles on the side of the killer's face. Tsumabuki, whose Yuma finds himself bringing his lover Naoto to meet his mother who in hospice, finds a way to quietly come out to his only living family when he introduces Naoto as just a friend. His mother notices the three moles on Naoto, something Yuma never did as he was concerned with other parts of Naoto's body and more focused on himself, in wonderment at his newfound desire for a steady romance. Cleverly, Lee and cinematographer Kasamatsu know we want to see if the other two strangers have that line of moles. They play coy and film them from the other side before revealing that they do as well. Suspicion is a game and the cinematography is in control.

While always a shallow observation, the cast of Rage is something else. Tsumabuki, a regular in Lee's films, was recently seen in another exploration of human insidiousness Traces of Sin. Gou Ayano played mysterious and shady in the same year's A Bride for Rip van Winkle (both that and Rage made Kinema Junpo's top ten list of 2016). These two are from just the Tokyo section but familiar faces populate the entire film. The only complaint would be that Chizuru Ikewaki has too small a part in the Chiba section. In Mipo O's Being Good she was able to work wonders in a reduced role.

If we label the three storylines as notes on a piano A, B, and C - the detectives can be D although they figure into the plot rarely - Lee, working from Shuichi Yoshida's source material, presses all four keys down at the beginning of the film. He alternates evenly between the locations making for an engrossing opening. From here, the bulk of the film, he focuses on just inter-lapping two of the notes instead of striving for an equal twine. Overall, the Chiba, Tokyo, and Okinawa stories get equal screen time but accomplished by playing only two at a time. With a narrative like this there is a concern that uneven distribution could lead to lost investment in a storyline or even lost momentum in a specific beat. In exchange the film achieves a few different things in service to a statement, though it rarely loses the typical thriller momentum it gains in its opening. By giving us only two stories at a time we are invited to find the similarities and differences between the interactions of the leads with the strangers in each location. Once the killer is revealed from this pool of three suspects we realize that within this exploration of trust and suspicion, there was never a right answer. Everyone laments the way they handled their relationships but since we were given simultaneous case studies it is understood they were powerless from the start to have had anything work out. On a cosmic level they were pinned down. A character who was dealt one of the worst hands of the film screams at the ocean. She recognizes that cruelty will always be the winning hand. Sakamoto's score drowns out her rage. Earlier, another character confides a thought, "I wonder what it feels like to be so angry you want to die."