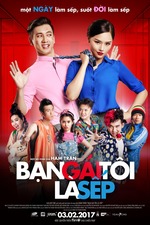 A strict policy on inter-office dating sets the mood for two secret lovers to make the resolution of a company problem much more chaotic. Office manager Oanh (Miu Le) coldly enforces the policy, her "save the cat" moment being he forcing two young lovers to decide which one will leave the banking company they work for now that they've been found out. Secretly Oanh is dating subordinate Cuong (Do An). It's been going on for quite some now but that doesn't stop them from worrying about it. Cuong suggests they get married, which excites Oanh. What she doesn't jive with is his suggestion that she quit so that they can do so. The film doesn't beat you over the head with it, but there is a strong sense her being his boss is a point of emasculation for Cuong.

Meanwhile, one of their company's ATMs was found to be paying out four times the amount of free money to anyone making a withdrawal. The task of finding all the account holders who took advantage of this and getting the bank's money back makes for a perfect bet between Oanh and Cuong: whoever doesn't get the money back must quit and then they can get back to being lovebirds and finally get married. Both the easy retrieval of the money and the strength of their relationship are purely hypothetical at this point.

The animated opening credits sequence gives a quick preview of the antics soon to be on display which include an alligator that has more action in said opening sequence than the film itself. The town where the faulty ATM resides houses another forbidden romance, this time between a teenage girl and her tattooed, motorcycle riding boyfriend who her mother disapproves of.

The slapstick performances are matched by a constantly stylized pace. While most of the conflicts are found to be related to or solved by love, as these things usually play out in such films, when the it comes to those who are avoiding giving the money they took from the ATM the fervor of the direction starts to shine. The bright colors of the sets and costumes work to suggest the trivial nature of such heighted stakes, so don't be frustrated when characters working towards the same goal continually sabotage one another.
The battle between sexes and the multitude of quirky interlinking characters put this in the tradition of the screwball comedy. Unlike the films of Hepburn and Tracy where chemistry made up for the middling entertainment value, Tran's film has the opposite occurring. The adversity between Miu Le and Do An is so heightened and the film creates many a set-piece based on their mutual antagonism that the late act attempts at reunification are not earned. The concluding remarks are not as thought provoking as Adam's Rib and the leads lack the charm to make such a troubled romance ultimately believable like in Bringing Up Baby or What's Up Doc?. Love conquers all but what created the thing that needed to be conquered in the first place? There are a few suspects but the film's real focus is a universal pettiness, covered by the disguise of duty whether occupational or personal, that drives its plot and its gags.

In a way She's the Boss finds home also with the heyday of the samurai picture. Audiences can take solace in the success of the individual, while that success was safely not brought about by the dismantling of the constricting establishment they did, or did not, rail against. It seems more work than necessary to find that which will provoke thought. Outright dismissal would not be respectful but not sitting back to just enjoy the ride feels similarly blasphemous.