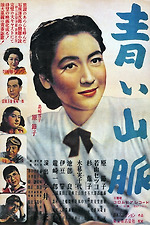 The Blue Mountains: Part I

In the midst of US Occupation, traces of outdated Japanese feudalism, and therefore its wartime militarism, were excised from films as determined by American censors. Filmmakers with leftist tendencies, supportive of democratization thrived (but not too left as certain films that revolved around workers' rights found out). Tadashi Imai's The Blue Mountains, divided into two parts and released within a week of one another, comes off as pandering to these occupied sensibilities if it were not for the performances (mainly the women) and its sincere didacticism pertaining to progress. Kurosawa's best works were incredibly didactic, but to be fair, so were his worst. Imai was just as much a humanist as his better-remembered contemporaries.

Hara plays a progressive teacher from the big city (but aren't they all?) who moves to a small town and confronts backward thought in the form of her students and co-workers at an all girls school. The film does not open with Hara though, instead we see the incident which sets the conflict of values into motion. A young female student (Yoko Sugi also seen with Hara in Naruse's Sound of the Mountain) has a meet cute with a university boy (Early Spring's Ryo Ikebe), they end up eating together and visit a psychic street vendor. Out in public they are spied by some of Sugi's classmates who use this as reason enough to make her the target of a fake love letter. Knowing the letter to be a ruse, she brings it to her teacher Hara and from here begins an uphill battle for the two women and the few others who are open-minded enough to stand by.

Hara's teacher has no problem immediately bringing the letter up with the class, and when they cite their behavior as necessary to uphold the values of their community Hara deems it rubbish without blinking an eye. The actions of these schoolgirls are petty; the teachers, parents, and other townsfolk who come to their defense are the true holdouts of feudal values.

In Hara's and Sugi's corner is a post-war Bad News Bears cast of characters. Ichiro Ryuzaki is the town doctor who circles around a romance with Hara. At first they are at odds with one another when he bluntly accepts his fate of a traditional marriage, traditional concubine, and traditional gender roles. All it takes is a slap to the face from the Eternal Virgin herself, to set him a different path. Setsuko Sugiyama is just as delightful as the other actress in the film she shares a first name with. As the younger sister to Michiyo Kogure's geisha (who has a thing for the doc) she buts her way into the group as an ally and spy, her speck are just bottle shaped enough and is the cherry on top of her act.

Sugi turns to Ikebe when she needs an escape from the letter-dilemma that begins to blow up thanks to Hara's confrontational method of teaching. In a row of great Hara moments she kicks off her shoes to lounge in the sun with Sugi before walking back into her classroom, a note from the guilty parties on the blackboard she immediately tears apart, correcting their grammar and character usage. Hara makes a room full of girls cry, unfortunately the second part sees her withdraw when her upholding of progressive values gets the doctor beaten up by thugs in the middle of the night.

Ikebe's friend Gen (Hajime Izu) is the last oddball to join the effort. His unusual handling of being caught pretending to be a parent at the town meeting regarding the letter and the girls who wrote it, as well as the way he practices his pacifism make him a perfect match for Setsuko Sugiyama. He's also tall, a shoe-in love interest for tiny characters in a film.

The film's values are very directly stated. Imai is able to take the cliches of the romance film (the film features at least three potential couples) and still make them about the social issues at its heart. Whether it's characters discussing these matters or a beach-side date interrupted by vocal protests, we never get to stray from Imai's views. It's a consistently interesting combination and I can see why this was in Kurosawa's top 100 favorite films.

Regarding the film's humanism it never treats anyone as a lost cause. Everyone has their reasons and Imai wants to call people out on the petty personal issues that lead to such outspoken repression. The gym teacher frequently gets sauced and harasses the geishas, but he's one of the strongest supporters of the girls who wrote the letter. It's nice to see the heroes of the film, paragons of progress as they may be, don't see themselves as above certain dirty tactics as they use blackmail to knock him down some pegs. Even the brats who wrote the letter find retribution but not that easily. Sugi's punishment for the leader is bizarre, yet sincerely human, easily the best scene in the film that doesn't involve either actress named Setsuko.

Reminiscent of the keiko eiga or tendency films of the 20s and 30s (usually explicitly left), these social problem films (shakai mono) are what Imai trafficked in. Essentially this is a three hour film and at times you can see the stretch marks. Hara is given a role that calls for plenty of range but part of that range is something we have seen her do over and over again. Ultimately though, watching her kick her shoes off and dance with another girl, slapping a man before storming off, and making a roomful of girls cry make this essential viewing.