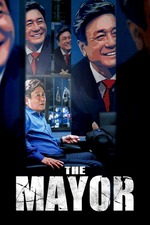 Despite being filmed in April of 2016, months before the shit really started to hit the fan for the now impeached Park Geun-hye, you would be hard pressed to find someone who won't draw comparisons between her countless scandals to the nearly two hours and thirty minutes worth of back-and-forths and back dealings found in director Park In-je's (2011's Moby Dick) political satire/thriller set during a mayoral election. The timely release of late April - the Presidential election is May 9 this year - suggests the people involved want Park's impeachment on mind. If the silver screen is a mirror being held up to those in the running, things do not look good for prospective voters.

Mayor Byun Jong-goo is nearing the end of his second term, gunning for a third, and has expressed his aspirations for the presidency to the chagrin of fellow party members. This should be the definitive part for Choi Min-sik as it is a performance about performance. For a politician every gesture is analyzed, everything said is cut up and made into something else. The Mayor suggests that these people are aware of the importance of performance and love every minute of it. Choi relishes it as well. When a sinkhole opens up, requiring Byun to put the campaign on hold, he makes sure his hair is the right amount of disheveled before emerging from his campaign bus. Everything is fair game in the race for mayor, even disaster relief.

Our access to the inner-workings of a campaign is Shim Eun-kyung (seen last year in one of the more memorable Korean revenge thrillers of recent years Missing You) as fresh out of college, go-getter in the advertising world. She calls out Byun at a hip hop concert appearance, something that impresses him enough to offer her a job. Who she reports to, the real puppet master, is another assemblyman (Kwak Do-won). He has an obsession with dress shoes and is working two sides of the democratic party for another member who also has sights on the presidency; help Byun get re-elected but cut him down a few pegs as needed. The other highlight of the Moon So-ri as a reporter so good at backstabbing and playing the field Mayor Byun offers her a job with him every time they see each other.

The most brilliant aspect of the film that's not Choi or Kwak is its choice to execute the film as much a straight-faced satire as possible. Plot beats that normally would divert the tone that of a thriller, are treated of matter of factly and their bearing on the plot is tremendously lessened. In one scene a slightly inebriated Byun strikes a defecting soldier with his car, sending his dead body off a hillside road. While it doesn't completely go away, you would be surprised how little suspense Park In-je tries to draw from it. When it does come back up, it's purely for the purpose of more nefarious activities treated as the norm. It's business as usual and everyone does it. Scandals beset other scandals (sometimes from within the same campaign), the public and the media are instruments that politicians are quite adept at.

Already within Byun's core team there are many spinning plates the film must juggle. But periodically we get access to the other campaigns, mainly a female candidate played by Ra Mi-ran. A necessity for the film's ideology. As with so many recent Korean blockbusters The Mayor takes a populist view as none of these shit birds can be trusted, even the underdog third guy running for mayor whose popularity is much lower as is his campaign funds. Train to Busan and Tunnel immediately come to mind as far as the depiction of universal governmental incompetence goes.

While mayor is not as high a ranking as president, it's easy to extrapolate, and that includes other nations. These people are not friends of The People. If it would make for a good photo, they would kill. But until then, babies, puppies, popular recording artists, and pregnant women will have to do.

Nanook of the North