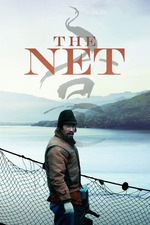 While most of the Korean mainstays of the international circuit have found inspiration elsewhere, mainly colonial Japan, Kim Ki-duk has revisited the topic of North-South relations with his latest. The divided peninsula and the interactions between its halves provided more of a setting for The Coast Guard. Works that were more explicitly about this Kim had only worked on as writer like Red Family and he apparently provided the story for 2010 Song Kang-ho starring spy thriller Secret Reunion. The Net is a thorough exploration of the bisected nation and the mentalities each have towards the other. Kim even extrapolates why reunification is hardly possible. Thought provoking as usual but regarding more immediate, political matters rather than solely deep-seated, universal inquiries.

Chul-woo's (Ryoo Seung-bum) morning consists of breakfast with his wife and daughter - potentially sex with the wife in the single bedroom shack - and then off to work. In a river that drifts off towards the South is where Chul-woo sets off to fish, his means of living. The guards at the border know him and trust him which is why they don't know what to do when Chul-woo's net gets caught in the propeller, his boat floats down to the south making him an accidental defector.

What awaits him recalls The Trial. An investigator (Kim Young-min) is sure that Chul-woo is a spy, and when evidence points to that he is not, he is at least sure he is right. Two sets of trials play out on the fisherman simultaneously. He will either admit he is a spy or happily defect. Chul-woo's reluctance to open his eyes when he is taken into the city is an act of optimism that he will return home. The more he's seen the worse it will be for him and his family. The scene of him left alone in the middle of a shopping center, eyes firmly closed and calling out for Oh Jin-woo, is absurd but the sentiment is obvious when he finally does open them.

The means of production are not the most extravagant, there is a modesty of budget that was felt in films like Moebius or most of Kim's films for that matter. But like Moebius, Kim has by now mastered the means to execute intriguing stories with very little. One can just imagine Kim hovering over the interrogation room with a handheld camera. His DIY nature seems almost integral to his mise-en-scene, interactions are of more important concern than overt, baroque style.

When Chul-woo makes it back home he is immediately put back into the interrogation process. The North's version means a hut outside for a bathroom instead of the South's collection of urinals and stall. Kim finds a unity between the North and South in their brutal tactics when handling potential spies but doesn't stop there on such a simplistic connection. He doesn't deny the differences, especially when it comes to the more superficial emotions hiding under each government's agents' intense nationalism. Kim's depiction of Chul-woo's time back North feels more biting. In the South section of the film, the majority of the runtime, the bond that develops between Chul-woo and the young agent assigned to chaperone him carries much more resonance. Cynically, the acts of kindness between the two men spell doom for both involved.

The connections Kim finds do not inspire hope, but ultimately The Net suggests that despite the economic disparity there is not much difference on a human level. Government agents on both sides cling to the idea of incompatibility but there are those that still remember families have been divided therefore blood relations exist between the north and the south. Larger powers acting on individual insecurities and moral forfeitures is the important kinship as it has the most sway.