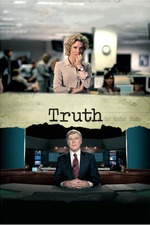 As I was watching (and enjoying) TRUTH, I was thinking, "Why wasn't this film well-received? Reviews seem mixed. What am I missing here?"

Then the final act unfolded.

And now I get it.

I won't go into detail about it but I can see why viewers were turned off by the surprising direction this movie takes. It was certainly not expected. In a way, I gotta give it props for picking sides.

TRUTH is, at first, a film about investigative journalism. Like ZODIAC (which was written by this film's writer/director James Vanderbilt), ALL THE PRESIDENT'S MEN, and more recently, SPOTLIGHT, we are given a glimpse of how the reporters arrive at the story and how they present their facts. It's a tireless profession, often frustrating, and TRUTH underlines those points really well.

But TRUTH then becomes about politics, and doesn't shy away from how it feels. That's not what journalism is about, so I can understand the viewer's disdain of mixing hard facts with left/right handwringing. Even the main character states in the film, "We're all screaming about politics here and forgetting about the story."

For me, despite of (and because of) its tonal shift, I thought TRUTH was damned compelling. It's a ballsy move to go there, and it kind of worked beautifully. The big cast is terrific all around (who knew Dennis Quaid would become such a reliable character actor?), but this is Cate Blanchett's film to own. She's (unsurprisingly) fantastic here.