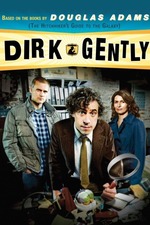 +++THIS IS A REVIEW OF BBC AMERICA'S Dirk Gently's Holistic Detective Agency SEASON 1 (2016) WHICH IS CURRENTLY NOT LISTED ON Letterboxd.+++

I already reviewed the 2010 BBC pilot, which this entry is actually for. So let's use this opportunity to do the same for the later version, which is an American adaptation and, echoing British comedians' words, something completely different.

The first season of Dirk Gently's Holistic Detective Agency is basically an eight-episode-long movie, adapting Douglas Adams' novels while not doing Douglas Adams at all. And while that is a pretty risky approach that might bother purists, I think it works pretty well.

In short, it uses the language and tone of the books while tackling a completely different plot, featuring all-new characters and even reinventing the titular hero. In my mind, this approach succeeded and there are still quite a few allusions to the source novels (some more hidden than others).

One of the shows biggest strengths is its cast and its writing: every character pairing has great chemistry (watching Bart and Ken or Dirk and Todd together is a constant delight). With a few exceptions, everything comes together quite neatly and culminates in a satisfying conclusion for a delibaretly confusing plot. It is quite a weird, niche show but extremely fun and comes highly recommended if you're into that type of occasionally loud, quirky and heartfelt entertainment.

I'll give it four stars (not rating it in Letterboxd since that would mix up the rating for the actual 2010 entry, which I give three stars).