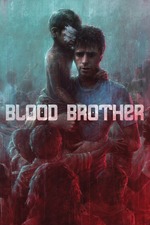 Blood Brother won the Grand Jury Prize and the Audience Award for US Documentary at Sundance this year, and admiration for the film continued to grow at Hot Docs. I didn’t catch the film until its third screening, yet the theatre was still packed with moviegoers buzzing with excitement. This story of two best friends is an inspiring tale, as director Steve Hooper goes to India to visit his pal, Rocky Braat. Rocky has found a calling in India working in an orphanage for children with AIDS. It’s a difficult occupation, as Rocky seems to balance a tightrope walk between life and death every day.

Blood Brother is bound to have viewers hooked with its opening scene. Rocky is atop a motorcycle, pleading with a father to let him a young girl to the hospital. The girl lies limp in her father's arms and she looks mere seconds away from death, if she's not there already. Hooper captures the scene with a frantic authenticity. The urgency of Rocky's plea is palpable, and Blood Brother then cuts away to explain what brought Rocky to India. The film leaves one on edge with concern for the girl's fate.

The riveting opening scene of Blood Brother reveals to the audience the heroism of Rocky’s mission in India. One sees a genuine bond between Rocky and the kids at the orphanage. The kids have such affection for Rocky that they lovingly call him “Rocky Anna”, which means “brother.” The term of endearment shows how Rocky connects with the kids by treating them as equals. He looks beyond their illness and engages with them as he would any child in need of aid.

Hooper’s brilliant handling of the opening scene also gives viewers a taste of the bold, unflinching eye with which the camera will train on Rocky’s story throughout the film. Blood Brother arguably offers one of the most undaunted looks at what happens when one suffers from a fatal disease such as AIDS. Blood Brother lets audiences connect with the kids and share Rocky’s fondness for them, but the film then turns from the smiling faces of the children to reveal the devastating effects they suffer through AIDS. Each life and death battle is harder to watch than the last. Blood Brother is especially compelling, though, in that it refuses to offer a sanitized portrait of the disease even though the victims are children. One particularly heartbreaking scene comes late in the film and sees one of the documentary’s most endearing children lying in a hospital bed on the cusp of death as his body breaks out into sores. Rocky’s reaction to the boy’s condition is nothing short of heroic.

Blood Brother, much like the 2005 Oscar winner Born into Brothels, offers an emotionally enthralling tale about the hope and optimism one can inject into a dire situation. One does wish, however, that the kids had been emphasized as the main focus of the project, rather than the American hero. Rocky’s devotion to the children is by all regards commendable, but one risks emerging from the film applauding the valour of its saintly subject rather than asking how one can contribute to the cause to which Rocky is devoted. Petty criticism aside, one can't deny that Rocky's mission makes for a moving film experience. Like Brothels, it’s difficult to detach the subject matter of Blood Brother from one’s opinion of the film itself: this is a worthy topic and it is given commendable treatment. Blood Brother is a top-rate character study, for Rocky’s story is ultimately one of self-sacrifice and altruism. Blood Brother is a deeply affective story of how the actions of one person can bring transcendent change to a whole community.

Which Way Is The Front Line From Here?…