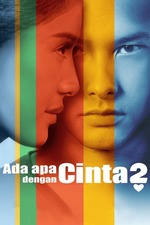 AADC2 is so good. It might be not as iconic as the first AADC, but in my personal preference, AADC2 is WAY better.

Riri Riza is a masterful director. Together with his cinematographer Yadi Sugandi, they truly use the camera as a pen to tell the story. You can see this clearly in the film (in the iconic "jahat" scene from the trailer) on how the information delivered on screen corresponds with his choice of shot scales. Besides being good at cinematography, Riza is also masterful in directing his actors to unleash their full potential and maximise their subtle acting in a film industry that values melodrama. Especially Nicholas Saputra, who pulls a Tony Leung with the drooping eyes and the underlying sadness, and I'm impressed with how he embodies Rangga so well. Even, dare I say, Ario Bayu is better here as a minor character than his entire 2.5-hour work in Soekarno.

The characters are written so well and each character has their moment to shine. For example, Maura, who feels bland and basic in the first film, is given such feisty and lively personality in this film. Sure, there are minor characters who exist only as plot devices, but the major characters are all fleshed so well. AADC2 has a grown up ensemble facing grown up problems while retaining the charm of their teenage selves.

This film is not perfect. The plot, in my opinion, is quite a low point of this movie. It takes influences from so many sources that sometimes it forgets its direction. (Some strong ones are Richard Linklater, Wong Kar-wai (probably the themes) and Angga Dwimas Sasongko. Yes, Filosofi Kopi Sasongko.) It sure has some cheesy bad decisions and lines that seem forced. Just a few, though. I am impressed by most of their numerous one-liners.

Overall, this film will cure your nostalgia from the first film, but with more grown-up matters of the heart. It's love, but no, it's not teenage puppy love. This film is about longing and a desire to reconnect with the past.