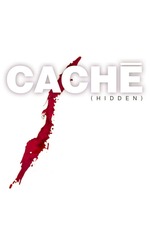 Of all the perplexing aspects of Michael Haneke’s Caché (2005), the narrative’s ambiguity is at the core of the film’s unsolved mystery. Its layered complexity is achieved not only in the unclear motivation of who is delivering the videotapes but also through the manipulation of diegesis through shifts between the tapes, the “base” of the film, and inexplicable scenes in which the boy with a bloody mouth is seen. By choosing to start the film with the first VHS footage and then cut to the couple watching it, right off the bat the viewer is launched into the voyeuristic layer cake of the narrative.

In the Poetics of Cinema, David Bordwell claims that “many art films create a ‘game of form’ [which] initially trains the viewer in its distinctive storytelling tactics, but as the film proceeds, those tactics mutate in unforeseeable ways” (Poetics of Cinema 165). In this way, Haneke continually blends subjective realism with ambiguity to illustrate the guilt and remorse Georges feels yet never has expressed for his treatment of Majid when they were boys. Atop this Haneke includes news footage and historical background regarding France’s treatment of Algeria, which parallels the aforementioned situation with lack of outright expression or apology for mistreatment.

Perhaps the most jarring of Bordwell’s mutations is a shift from objective realism to subjective realism occurring later in the film, in the scene preceding Majid’s suicide. There is a cut from Pierrot and his father talking to the television program Georges hosts, which has the exact same type of bookshelves as in his home. This set-design choice could be read as authorial commentary in mirroring the environments between Georges’ home and work, reminding the viewer of the differing spectrums of control he has in each. Various guests talk before Georges stops the footage on a line editor, rendering a shift from objectivism to subjectivism in manipulating this perceived reality.

Georges’ control over this realm is in stark juxtaposition to his crumbling life, which could likely have been salvaged at any point in the narrative if he had admitted his wrongdoing to Majid and apologized. Occurring right before the scene in which Majid suddenly slashes his throat in front of Georges, Haneke’s authorial commentary emerges through choosing in this preceding shot to explicitly depict Georges altering his own reality to fit his specifications. Georges has been neglecting taking ownership for his actions towards Majid since the incident (much like the scarring diplomatic history between France and Algeria), and it is a caustically ironic choice that the last scene before Georges receives the first physical punishment (besides the blackmail tape sent to his boss) for his repressing shows him completely in control of this subjective reality which he has built his entire life on since the events of his childhood (Al Arabiya News, Irish and Ahmed). Georges constructs this aspect of his reality through editing in the same way that the reality of the whole of the narrative is constructed: he repeatedly watches their own reality play out on the sent VHS tapes, yet is unable to alter his reality through editing out what is undesirable to include.

The shot which follows this scene shows Georges walking out of a theater, unable to distract himself from what he has just witnessed. He heads home, but upon entering hears the voices of guests. As he walks up the stairs, an intentional, symmetrical division of light is cast on his back: half lit and half in shadow. This shot functions as authorial commentary in representing Georges reality as being sharply divided between the reality which he shares with everyone else and his own subjective reality of repression and aspects that he has not shared with no one else. It is also an ambiguous shot: was witnessing and being a cause to this suicide what was needed for Georges to come clean and express genuine remorse for his past actions, especially that they have now indelibly tainted his present? It appears that this was not enough, and Georges continues to maintain his shields against vulnerability and admitting wrongdoings.

In considering Bordwell’s claim that “any breakdown of the motivation of cinematic space and time by cause-effect logic-can be read as ‘authorial commentary’”, the majority of Caché’s narrative is an authorial commentary on the poisonous effects of not expressing/acknowledging previous wrongs (155). In considering the concluding shot however, this concept merges with ambiguity to create a doubly muddled means of motivation. The last shot captures the objective reality of the end of a school day: a static camera observes mingling amongst students while Pierrot and Majid’s son meet and have a friendly exchange in the middle left of the screen. The decision to include this shot as the last is incredibly puzzling due to the untied knots of the mystery: is this shot included to show that the next generation of Georges’ and Majid’s families can get along without the tainted history of their fathers (by implication also applying to a new generation of French and Algerians)? Could it be to implicate Pierrot as the one who has been sending in the tapes? The latter perhaps has more weight to it, as his sulking demeanor throughout the narrative is inexplicable and can only be traced to the occasionally brooding nature of adolescents. In being an art film, Caché obviously plays into Bordwell’s argument that “[i]f the organizational scheme of the art film creates the occasion for maximizing ambiguity, how to conclude the film? The solution is the open-ended narrative” (156).

Another curious aspect of subjective reality can be seen when Georges goes to get a coffee after his first meeting with Majid. When he accidentally drops a coin, being a random act which is impossible to predict, the camera tilts down to follow him picking it up. In this way it is implied through the cinematography that the camera, even in showing reality play out in real time, knows more about Georges than he himself does. By extension, the suggestion is that even when we see the mundane objective reality of not only the “base” of the film but also the VHS tapes, it is actually subjective reality in that Georges has “edited” out the parts of his life which he has repressed. Georges’ reality can never be objective because he has manipulated the narrative of his own life to show a subjective version and not the objective truth. This can further be seen in every instance in which Georges lies to either Anne, his guests, his boss, and implicitly his coworkers (when Majid’s son overtly asks to speak with him at the office). Georges continually buries this objective reality with lies and deceit in order to not face what has been haunting his conscience for decades. This can also be perceived as authorial commentary in considering the statement Haneke is making about the deeply buried aspects which we, as fallible humans, rarely unearth from the darkness. Furthermore, the amount of chances Georges has to apologize and make right the situation conveys Haneke’s authorial commentary on how simple and freeing it is to admit the hard truths, otherwise you become the architect of your own demise. If he had apologized once to Majid, and meant it, it is unlikely that the suicide would have occurred.

It is in these ways that Caché uses a mix of subjective realism, authorial commentary, and ambiguity to represent Georges’ guilt and self-imposed destruction through merging layers of form. By concluding with so many ambiguous threads, Haneke has created a narrative that portrays individual as well as nationalistic guilt in considering the effects of unexpressed guilt.