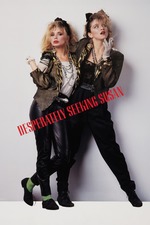 "The script was already called Desperately Seeking Susan. It wasn't named after me." - Susan Seidelman

Also, during her Q&A, Susan said Bruce Willis was the runner up to play Madonna's boyfriend?! He later thanked her for turning him down, since it gave him the opportunity to accept the lead role on Moonlighting. The rest, they say, is history ¯\_(ツ)_/¯.