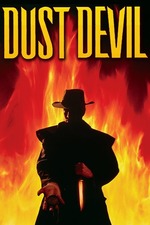 The s-l-o-w pacing of the final cut really killed this movie for me, especially since so many of the actors can't handle any of the dense, witchy gobbledygook lines. The cinematography looks stunning, though. Lots of sweeping South African vistas and characters sauntering into blood red sunsets. Akira Kurosawa once said*, "All you need to create an epic is two characters: one in the foreground staring at the other in the background from a great distance." Stanley took these words a little too much to heart when creating Dust Devil, since most of the (nearly 2 hour!) slog consists of pseudo-spaghetti Western compositions framing the Dust Devil against the heroine.

I also liked some of the more kinetic camerawork. Like that shot from inside the mirror traveling away from the demon, or when the camera completely flips over to focus on the victim of a car crash. I could've done without the amateur acted cop and his backstory, since it really adds nothing to the spine of a basic cat and mouse chase. Each time the film cut back to his search for the killer left me checking the time on the DVD. I could tell the outcome from a mile away, so figuring out the case with the cop as he mucks his way through each scene really dragged down the pace. Less is more, Stanley! The sequence where the cop creeps through an abandoned auditorium over projected images really jumped out at me though. Same with the light peeping through slats in the woodwork, forming perfect parallel lines in shadow.

Stanley's got a good eye, but he needs to know when to self-edit and show instead of tell. I almost fell asleep when some drive in witch doctor explained the backstory of the Dust Devil and his motivations for the 3243543 time.

*According to Richard Stanley