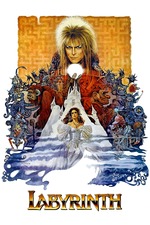 A live action cartoon made by an aging hippie featuring a pissing dwarf wearing a puppet head and David Bowie as a high wigged, high collared villain ripped straight from a weekday afternoon anime or Sentai adventure. I've seen bits and pieces of this movie on TV throughout the years, but never sat down to watch it in one sitting. Silly me! Labyrinth is almost too much of a good thing -- so many crazy puppets and alien sets and ambitious ideas that the plot almost derails during a few kooky fantasy set pieces, like the Fire Gang head swapping song or David Bowie serenading a baby while surrounded by a hoarde of goblin puppet-minions. Come to think of it, any song pretty much grinds this movie to a halt. But those muppets! Such fine SFX artistry and innovation on display that has yet to be replicated.

I also enjoyed the po-mo shoutouts to Alice and Wonderland, The Wizard of Oz, etc. via Jennifer Connelly's books in her room. Is Labirynth a stone cold otherworldly fantasy classic like those works? I think so! A tale of a girl wandering into a mixed-up world that still feels fresh to me today.