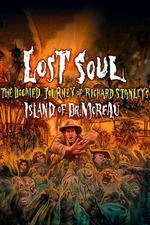 Personally, I've never understood the Brando effect in movies. Why do old hat directors and producers trip over themselves to work with a notoriously difficult actor who demands an astronomical salary for phoned in work? I guess some directors, like Frankenheimer, are masochists who love engaging in screaming matches with fossilized talent.

I honestly knew nothing about Richard Stanley before watching this documentary, but his enthusiasm for the original Moreau material and unique (and witchy) point of view definitely inspired me to rent Dust Devil. I was a dummy and didn't realize tonight's screening of Hardware sold out!

My favorite anecdotes about the doomed Moreau production include l'il man Nelson de la Rosa's "highly sexual" nature and Brando's creative input, like an idea for Doctor Moreau to wear a hat the entire movie and remove it at the end to reveal he's a dolphin. Also, how did Richard Stanley survive in the Australian wilderness for days on end before returning to the set in a dog mask? Maybe another spell protected him from dehydration and all the poisonous Aussie animals lurking in the underbrush. Hopefully this film will light a fire under some benefactress or cigar chomping dentist to throw some cash Stanley's way so he can make another movie.

Hollywood, man. Just don't do it. Too much money and ego and power games and ass kissing. Last time I rubbed elbows in that town, some out of touch old crone wanted me to re-write a script as a vehicle for Beyonce and cats singing "All the Single Kitties."