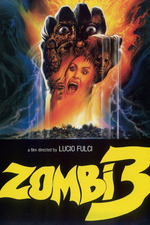 “A movie made by a bunch of idiots.” - Lucio Fulci

The wizard of nightmare drone Italian gore, Lucio Fulci, filmed about 70 minutes of Zombi 3 before quitting over creative differences. Without him, a cabal of Italian exploitation creatives threw a bunch of seeping head wound set pieces into a pot and served them fast and loose to see what would stick. Troll 2 director, Claudio Fragasso, wrote the gut munching script and completed filming along with Terminator 2: Shocking Dark’s Bruno Mattei. Instead of recreating the dirt-caked jungle rot of Fulci’s Zombi 2, which was marketed as a sequel to Dawn of the Dead (oof my head), Zombi 3 focuses on ensuing chaos when dumb party people go to the beach during an epidemic.

Sound familiar? Through Zombi 3 drags with plenty of scenes featuring balding dudes talking in rooms, it could provide a cautionary tale for thrill seekers bucking COVID quarantine. If only these Mediterranean sort-of-teens hadn’t piled into a van blasting bargain bin glam metal! If only they had stayed at home! Why was a trip down the shore worth dozens of lives? I’m guessing Fulci or Mattei or Fragasso or whoever sank their fingers into this living dead husk of a movie didn’t have any subtext in mind, but in the current pandemic climate, the sight of rotting corpses swarming awful smooth brained coeds might hopefully scare SOME jabronie straight about venturing outside to clown.

Still, the too many cooks mess of Zombi 3 at least keeps it interesting. Sure, the movie might not work as a whole, but at least it never drags. Tired of creeping zombie dread? Here’s a bunch of hazmat suits firing assault rifles at anything that moves. Bored with explosions? Here’s some light comedy featuring wasted youth burning to lose it on the road.

Throw in some synthesized horror beats that sound like a boss battle in Streets of Rage, and I’m in genrehead heaven. Zombi 3 feels chaotic and kind-of-draining and almost a sad snake-eating-tail end to the Italian splatter golden age. The shocks feel more sedate, the formula tired. Papa Fulci needed a nap. But I’m glad this miracle of a movie willed itself into existence with the help of many creative hands. The world needs more scared straight scary tales about ignoring pandemic protocol!