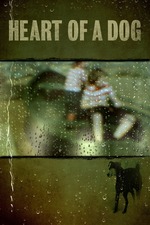 The unexpected recipe of eulogy, cute animal videos and surveillance culture dread synthesized into the finest cinematic representation of the act of remembering I have ever experienced.

I don't know nothing about nothing, so it wouldn't surprise me if this is philosophically facile or a misrepresentation of Buddhist beliefs or even Just Plain Dumb, but there is such an emotional immediacy that I never once worried about any of that. I have no spirituality to speak of, no real personal philosophy, and little to no interest in obtaining these things. But I was still riveted by Laurie Anderson's exploration of all of this because it was so simple, so straight-forward, and urgent.

The film's formal approach to depicting memory is not ground-breaking. You've seen this all before: expressionistic animated sketches, super 8 footage slowed down to one frame per second, dissolves, looping clips, stock footage of rain on windows, bare branches of trees, amateur photographs of family blown-up to abstraction. In fact, in most instances, I'd call it cliche.

But what pushes Heart of a Dog past cliche into sublimely moving territory is it's commitment to this aesthetic, and it's alchemical relationship with Laurie Anderson's audio essay. There is an earnest and desperate tenor the project takes on, stream of consciousness that goes beyond mere word association into active searching, a quest for answers, truth, some sort of meaning, yes, but also a self-reflexive understanding that by forcing raw memory into the shape of the story, one also scars and dilutes it, possibly perverts it, maybe even does it a dreadful disservice.

She gives you time to ruminate, to meditate, to consider. The film's score and ambient soundscape are predictably subtle and powerful, and have a distant subterranean sound that matches the faded images perfectly, which match her matter-of-fact and open narration perfectly, which matches her probing free-form essays perfectly.

I do not share many things with Laurie Anderson. We are very different people, with different experiences, different beliefs, different philosophies, in different situations in different points of our lives. But the 75 minutes I spent watching this movie felt like being given a gracious entry into her head, to live as she lives, the think as she thinks. And I can't thank her enough for it. A

The Killing of Sister George