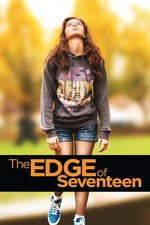 “There are two types of people in the world: The people who naturally excel at life... and the people who hope all those people die in a big explosion.”

I can see why people would like this better than Lady Bird. They’re not wrong, but I would say I heavily disagree.

“Everyone in the world is as miserable as you are. They’re just better at pretending”

The Edge of Seventeen is a cringeworthy, yet exhilarating coming of age movie with awesome acting performances by Hailee Steinfeld (who I’ve gained new found respect for) and Woody Harrelson who can do no wrong and never disappoints. Adding this to the list of movies I regret not seeing in theaters, but it also didn’t help that it left theaters pretty quickly.

Only thing preventing me from scoring it higher is that I again feel like this is one of those movies where they just don’t resolve all the issues and had some parts in the plot that were unnecessary.

“Everyone just wants to be important in life. Thing is, no matter how hard they try, there’s always going to be someone more important.”