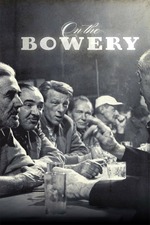 Lionel Rogosin's docudrama, about destitute men living on the fringes of Manhattan's notorious skid row, is wildly different from most other post-war American films of the era, a raw and unflinching film that puts viewers right in the gin joints and flophouses of New York City. Starring real-life alcoholics, the film features a loosely scripted story about down-on-his-luck Ray (Ray Salyer), who arrives on the Bowery and, after a night on the town, is robbed when he passes out in the gutter. The next day he meets street veteran Doc (Gorman Hendricks), who initiates Ray into this world without telling him that he was the one who stole his money and meagre possessions. Presented with little editorial comment or false-note dramatics, On the Bowery is a refreshingly candid look at this famously impoverished area, drawing from the neo-realist tradition and direct cinema movements to capture a real portrait of what it must have been like--a sometimes sinister place where friends turn to enemies fast over a few pennies and betrayal for the bottle is an everyday occurrence. Haunting, but fascinating.