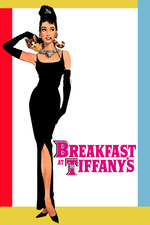 Breakfast At Tiffany's has a lot going for it. A truly iconic leading lady in Audrey Hepburn, playful direction from Blake Edwards and a deeply romantic and wistful theme song and score by Henry Mancini. It also has a horrendous racist caricature performance by Mickey Rooney as Mr Yunioshi. It's an regrettable inclusion of which the key players involved have expressed regret about but it can't be swept under the carpet so easily. It's immensely bad form and seems entirely mocking of the Asian community in general, not least the Japanese. It's a small part in light and frothy film, high on style and low on real substance. Breakfast At Tiffany's will ultimately be remembered for the right reason's. That bloody Deep Blue Something song...no wait, I mean Audrey Hepburn's delightful performance as aspiring socialite, Holly Golightly.

Now as comedies go I wouldn't say it was especially funny, more light hearted and playful as I mentioned in regards to Edward's direction. Mancini's score also plays a factor in this playfulness, something the two would go on to achieve with the Pink Panther films, albeit with more genuine comedic chops. The technicolor photography by Franz Planer is handsomely done and only serves to heighten the style of the picture.

Back to Hepburn though and her performance here strikes me not just for her luminous style and iconic appearance but for the immense fragility her character displays, she is also quite a contradictory character and displays these attributes in an entirely fascinating way. Without her this film just would not be half as engaging as it is and it is a testament to her that she succeeds in my mind in portraying this deeply conflicted and complicated character. Here she is not just the icon; she is the actor Audrey Hepburn and it is important to note the distinction. The film may be light in tone overall but her performance is layered and highlights something more, something deeper about her character.

Breakfast At Tiffany's made an impact on pop culture, how could it not? With such an icon in the title role it was deserving of it's success but time has faded it's charms somewhat and it has the questionable false note of a performance by Mickey Rooney. But this does not taint the majesty of Audrey and Moon River will always ensure this film remains somewhat relevant.

*Having spent the day with Audrey and Moon River running through my head I've decided to up the films score by half a star. If the film was just these two elements it would get 5 of them, easily.