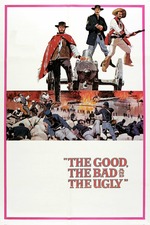 "You see, in this world there's two kinds of people, my friend: Those with loaded guns and those who dig. You dig."

The Good, the Bad and the Ugly is dirty, dusty and sweaty. It is a film where loyalty is measured by how much money you're willing to put on it and generally follows men who do what ever they feel is necessary to get what they want, even the supposed 'Good' character is decidedly lacking in actual good guy qualities. This film presents America in ruins, all morality is gone, greed is the only thing that truly counts amongst men. The country is like a waste land created by people who want more than they are entitled to.

Through stunning compositions Leone's film views the chaotic Civil War with a cynical eye. People are there to exploit it rather than fight for a just cause. Whether it is wide shots that show us the stunning views or the legendary Leone extreme close ups that show us the sweaty, greedy and desperate men that inhabit the lands, The Good, the Bad and the Ugly is just shot to perfection. Of course with Ennio Morricone's iconic music score in toe this is a film that sounds perfect too - at least from a musical point of view - it gives the film an even greater sense of scope.

I would need five pairs of hands to count the number of stand out moments in this film, the introductions of the characters alone are all superb, the sadistic way in which Tuco takes Blondie through the desert, the stunning juxtaposition of the haunting music playing over the brutal torture of Tuco by Angel Eyes, the use of explosives to destroy the bridge and of course the operatic build up to the final three way duel at the cemetery. The film is full of big stand out moments.

But it's also the little things that make it special too, the way Leone cuts to the wives hand, almost freezing in fear as Angel Eyes shoots to kill her husband, the moment Yankee soldiers dust off their disguise, the camera panning all the way across to reveal Blondie's rifle ready to fire, Tuco being unable to read the word idiot or struggling to say the word unknown or a group of soldiers having their picture taken. There is so much scope here, I could go on forever revelling in the perfection on show.

The Good, the Bad and the Ugly is the quintessential Spaghetti Western, not concerned with strong law abiding citizens or clean cut hero's of any kind. It absolutely blows the old John Wayne westerns out of the water with all the despicable acts and devious double crossing going on, it's far more cynical about the desires and morality of men who are more interested in money than loyalty - although they will keep their word as their bond if it means getting more money or putting one of their rivals in a sticky situation.

It is a truly iconic film that couldn't be more swift for a three hour film. It made an icon out of Clint Eastwood who chews the scenery but Lee Van Cleef as Angel Eyes is a total bad ass and Eli Wallach pretty much steals the entire picture as the most deplorable of all, Tuco! It really is a pleasure to watch him and the others head towards a real dance with death. Unforgettable and only rivalled - and in my opinion surpassed - by Leone's own, Once Upon A Time In The West. This is still one of the best films ever made though!