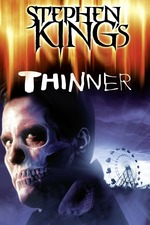 I've got to be honest, this isn't a great movie. It might not even be good by some metrics. Considering the fact that it hovers around 15% on Rotten Tomatoes, it would seem that most people agree: Thinner is Bad.

I don't go that far, though I won't heap praise on the film. It may not succeed in being "Great" or even "Good", but goddamn is it engaging.

The central role of Billy Halleck played by Robert John Burke is one of the weirdest roles you'll see in a film like this. It's hard to put a finger directly on why, but you just can't peel your eyes off of him. At first, it feels like just another smiley, gregarious, good-humored fat guy role, but you soon realize that there is a certain pathology to Billy's grinning demeanor.

This guy smiles at EVERYTHING. Jokes at his expense, food, marital strife, tragedy, Gypsy curses and his own mortality - Billy smiles his way through it all. Coupled with his odd, grumbling vocal affectation it makes for an unsettling performance. I never quite smiled with Billy, nor did I feel like he should be smiling, but the out-of-place grins somehow add to the dread that builds through the film.

The fat suit used to fudge the fact that Billy loses 170+ pounds over the course of "Thinner" is actually pretty decent. Fat suits never look like actual fatness, but here the attention to detail shines through the imperfect practical makeup. As Billy rapidly drops weight, he gains saggy skin around his face and neck, as he gets dangerously thin, he gets higher cheekbones, a built-up brow line and a pair of false teeth that really drive home his emaciation.

Watching Billy's transition from fatty to skeleton is half the fun of Thinner. The other half? Well, that's a bit tougher to explain.

If the central performance here by Robert John Burke is the meat in this stew, the supporting performances are the potatoes, carrots, onions and delicious broth. There is an acid edge to every main performance here. Billy's grinning countenance is mirrored back at him wherever he goes, but there is a malice behind the smiles. Whether it's the Gypsy King who curses him, the wife of a dying judge who is also cursed, or his own (cheating?) wife - Billy is surrounded by sharks with toothy grins.

Lets talk about Billy's wife for a second. It is implied, though never made explicit, that she is cheating on Billy with the family doctor - a man who masks the affair with false concern for Billy's well-being. Or is it false concern after all? We're never told for a certainty that the wife's infidelity is anything but a product of Billy's fevered imagination. As the pounds fall off, his mind seems to fall along with them, and his desire for a cure is quickly replaced by a desire for vengeance - not just against the Gypsy who cursed him, but against his (cheating?) wife and doctor friend.

Thinner is described in some reviews as "Bland" and I couldn't disagree more. This movie is never bland or boring, no scene overstays its welcome and there is no noticeable drag to the pacing. As a matter of fact, this movie feels stuffed with visual interest, strange lines of dialogue that somehow fit despite making you raise an eyebrow and over-the-top character turns. If you can be bored by those things, then maybe movies aren't for you.

All that said, this isn't among the greatest horror / suspense films ever made, but it is stand-out in the long list of Stephen King adaptations. Even if you end up hating it, and you well might - "Thinner" will certainly give you cause - I'm willing to bet you won't be sorry you watched it.

As a bonus, watch this one with a friend who likes picking movies apart. You'll have fun. Trust me.