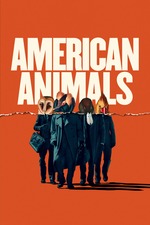 A good heist movie is undeniable, you know one when you see it– or more aptly, once you’re in it. The planning, the getaway, it's effervescent. American Animals is a stark reminder of what a real crime feels like; it takes time, it's nerve-racking, people get hurt, and it never goes according to plan. The film creates such an elicit feeling of this thrill through a real life, true story. The modest take on high-level tension is a shamefully overlooked hit of the summer.
Bart Layton’s feature writing and directorial debut subverts the common ideas of the long bolstered genre within the big picture popcorn blockbusters. The criminals here are not suave masterminds, the target is nothing flashy, and the motivations are simple. Four college students plan to steal rare books from the university library to resell them and get rich. Evan Peters and Barry Koeghan lead the film as Warren Lipka and Spencer Reinhard, the formulators of the scheme, accompanied by Blake Jenner as Chas Allen and Jared Abrhamson as Eric Borsuk, the eager cohorts and role players for the master plan. Warren is a sporadic rebel towing the line towards burn out, with Spencer as his equally unfulfilled, but far more subdued counterpart. The two’s dynamic is simple, yet honest. The quartet of young actors’ performances lends somberness to a film that could have become deafeningly campy. In lieu of a big Tyler Durden speech about getting one over on the man, the film chooses to focus on the absentmindedness that comes with such rash decisions like robbing a library. The decisions made by a couple of stoned college loners are thoughtless and ill conceived, giving a direct approach to a film exploring the meaning of truth within the commonly exaggerated genre.
The plot reaches its gripping climax through the tension of the slow building raid upon the library. You become locked within the library right along with the characters as you experience the thrills with a heart pounding anxiety that’s only present through truly great filmmaking. The difficult morality that accompanies the disregard of our basic societal integrities is expressed in the consequences that come with a true crime, providing not only a gripping plot, but thoughtful meaning as well.
Layton makes it clear that the film stands as more than just an adaptation of a bizarre news story through his addition of interposed interview footage from the real life culprits and their families in a pseudo documentary style. The juxtaposed format plays to narrate the internal decisions of each character, though ultimately comes off as a DVD extra woven through an already encapsulating movie. I understand the motivation behind the decision, but it quickly became the biggest detraction within the film. Layton’s attempt to create a statement on truth in storytelling and the misguided embellishment of memory is admirable, but simply doesn’t fit within the movie at hand. Embellishment, to some degree, is part of the game, and the attempt to challenge it, while interesting, was nothing more than a distraction.
As a sleeper hit in a mostly dormant summer, the film failed to get away with much popular reception. Understandably, with smaller stakes than your star studded Ocean’s 8, its theater run was short lived, but an impressive venture into the genre that was too easily overlooked. The film’s ingrained realism makes you ask more questions about the crimes we see on screen and the truth to what they’re telling in an interesting contrast to the common crime capper. Layton is keenly attuned into the precise levels of grittiness within our everyday immorality and the honest emotion fueling it. Layton is able to adapt the true story of the attempted escape from the real world through the dream heist, and explore the far more real decent into the nightmare of true crime.