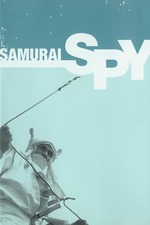 I really enjoyed Masahiro Shinoda's film noir masterpiece Pale Flower and in Samurai Spy (1965), he takes on another genre, the chanbara (samurai film), successfully according to his own vision. It takes place in the year 1614 during the period of uneasy peace that followed the years of warfare that led to Japan being unified under the Tokugawa shogunate. In the 2005 interview Shinoda suggests that he was trying to create an allegory of cold war politics with Japan in the middle between the capitalist Americans and communists Russians. This doesn't seem clear today, but then again neither does the intricate plot of allegiances, secret plots, and double crosses. This is not a typical samurai film with lots of sword play, people are often killed off screen by ninja assassins and in one on one battles. This film also contains another impressive collaboration with the preeminent composer of the 60s Toru Takemitsu and Shinoda (see Pale Flower and Double Suicide). The Criterion special features include: a new, restored high-definition digital transfer, an exclusive new video 16-minute interview with director Masahiro Shinoda, a gallery of key characters in the film, a new essay by film scholar Alain Silver, and a new and improved English subtitle translation.