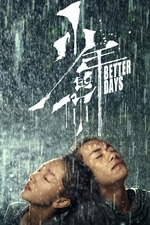 Per Enström’s review published on Letterboxd:

Better Days is an amazing story about the immense pressure put on Chinese youth, bullying, and love. The film is full of absolutely gorgeous urban night-time shots and the camerawork never gets boring. The performances by Dongyu Zhou as Chen Nian, the bullied schoolgirl studying for the college entrance exam; and Jackson Yee as Xiao Bei, the small-time criminal, social outcast, who through happenstance ends up protecting Chen Nian, are world-class. Their performances are absolutely amazing.

The film might be long, over two hours, but it's one of the rare examples of where it's justified. We're given well-placed breathing room, accompanied by Varqa Buehrer's beautiful score, and the story never ceases to be engaging. The one flaw the film has is perhaps that it has a few too many endings. It ties its loose ends together, but a few of them are laid out like endings instead of parts of the story.

Per liked these reviews

Per is using Letterboxd to share film reviews and lists with friends. Join here.