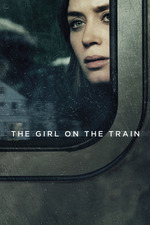 Emily Blunt is a woman (note: not a girl) on a train. She sees her ex-husband and his new wife every day, as the train goes right past their house. She also sees her ex-husband's new wife's nanny. Then the nanny goes missing. Then is found, dead. Did Emily do it? Or did she not?

Urgh. This is the best 'bad film' I've seen for a long, long time. Cardboard cut-out characters are pulled up on screen and do cardboard cut-out charactery things. We can tell that Emily Blunt is an alcoholic as she pours vodka into a sippy cup and her mascara runs. We can tell she is sobering up as attends a (single) AA meeting and her mascara does not run anymore. We can tell the nanny is a nympho as she had a lot of sex, mostly in woods and up against trees. Yawn.

The longer this film progresses, the more farcical it becomes. When the good, hard-working ex-husband is *SPOILER ALERT* revealed as being not so nice all pretence of his previous niceness vanishes and he goes all-in as a not-a-very-nice-man. Other cardboard characters shuffle on when needed and shuffle off again when they are superfluous to the plot.

The most positive thing I can say about this film is that it reminded me that my corkscrew had broken and that I needed to get a new one.