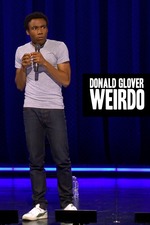 Not only is he absolutely screen-stealingly hilarious in Community and a good rapper, he comes along and performs a quite frankly laugh-a-second-thon stand up! This dude was BORN to be an entertainer, and if so, then keep on doing what you're born to do Donald, cos you're the best at it and I know I'll never get tired of it.

It runs out of a little steam towards the end, and sure his transitions between topics are jarring, but that don't mean shit, he still made me laugh constantly, with no exaggeration. Not only is some of what he says completely true and delivered in a very comedic way, he tells some really great stories with them.

I love how he tries to censor himself because his parents are in the audience. He constantly corrects his "shits", despite saying fucking freely. Weird, maybe his parents hate the word shit. Bit bizarre though? Anyway, it's hilarious.

Donald Glover is a genuinely cool and funny guy if all the stuff with him in are anything to go by, which I'm sure is a pretty vast and reliable source. Hilarious standup from an hilarious guy, some brilliant concepts and a few clever concepts that'll change the way you think about various issues.

Donald Glover. What a weirdo. What a legend.