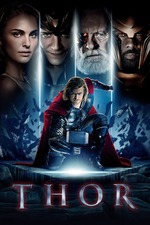 The god of thunder must learn a valuable lesson in humility, in order to become truly worthy to wield the power of Thor.

"Thor Odinson ... you have betrayed the express command of your king. Through your arrogance and stupidity, you've opened these peaceful realms and innocent lives to the horror and desolation of war! You are unworthy of these realms, you're unworthy of your title ... I now take from you your power! In the name of my father and his father before, I, Odin Allfather, cast you out!"

So I just thought this movie was ok when I first saw it many years ago during phase one of the MCU. At the time I always got really annoyed with superhero flicks where the hero lost their power. But with revisiting this first chapter in Thor's legacy, I did appreciate how being cast out and turned into a mortal was a good lesson for him to learn, inorder for him not to be so overzealous and be more tactful with his abilities.

Director Kenneth Branagh who is well known for his Shakespeare adaptations was a good choice for bringing this story of magical nordic warriors with pointy winged helmets to life. We have come to see just how special Chris Hemsworth and Tom Hiddleston are in these roles, as they have developed over the course of several movies. Plus you can never go wrong with Anthony Hopkins.

I can't believe I never noticed Hawkeye was in this, and you really start to see this combined universe come into play with Sheild's presence in Thor and Iron Man 2. Also a shout out Idris Elba for being the best of the side characters, in his role as Heimdall the gatekeeper. The CGI for Asgard and Thor flying does look a little dated. But for a primary element of the film being a rainbow bridge, that part does not come off as cheesy as it sounds.

Thor's hammer landing in New Mexico and attracting this group of dudes to try to pick it up is fun, and feels like a modern day Sword in the Stone. Loki actually being a Frost Giant is an interesting twist, but it does not seem to matter much after this movie.

Thor joining up with Jane played by Natalie Portman and her crew of scientists is fine. But It never feels like their so-called research is amounting to anything. They are mostly just there to comfortably play off of Thor, while he goes through this whole fish out of water dynamic.

Thor 1 definitely falls in the middle of the pack compared to the rest of the MCU, but overall it works as a solid origin story for our first out of this world hero in Marvel's Cinematic Universe.