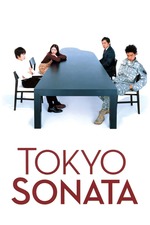 How wonderful it would be if my whole life so far turns out to have been a dream, and suddenly I wake up and I'm someone else entirely.

I'll review this film with what I rarely do, a personal anecdote. One day at work, I fainted. I'm usually quite good at knowing when I feel faint and manage to either sit down or put myself to the floor before fainting, but not that time. I hit the back of my head before I reached the ground. While my co-workers were deciding whether I had a pulse or not, I was out for the count, but right before I regained consciousness, I saw myself in a field dancing with a dog nearby. It was strange, in retrospect, for a number of reasons .. I saw myself from the third person point of view, zoomed in on my limbs, so it was like watching a part of somebody else dance but my brain was telling me it was me. Other reasons it didn't make sense was I'm not a dance in the meadow sort of outdoorsy person, I couldn't recognise the meadow, I didn't recognise the dog at all (and the dog wasn't even technically seen but heard and felt, if that makes any sense at all), and I didn't recognise it as a memory. It was what my brain was deciding at that point in time while my eyes appeared wide open to everyone else.

I woke up with people hovering over me. I not only didn't remember where I was, but who I was. The only memory of me was me dancing in a meadow. And frankly, I was not only confused why I suddenly found myself lying on the stone cold ground with people hovering over me, but I felt angry. Though people didn't really see that. They saw me looking baffled and commented on it. A minute or two later, my memory and identity returned. .. and I felt so sad. There was the most lovely peaceful and euphoric feeling as my brain experienced a hit that it was truly otherworldly and somehow realer than anything I felt otherwise. That feeling was growing stranger by the hour and was becoming a distant memory, fading away like a half-forgotten dream, the experience lost now with only the memory of it remaining. It is still strange for me to say but I continued to feel anguished over returning to the "real world." It somehow felt sterilised, didn't feel real. I haven't had total retrograde amnesia since that time. What a terrifying feeling equally to wake up and not remember anything except my brain piecing together information and realising soon after how much of it didn't make sense. An identity based on one experience? Waking up in a totally different place? It went from euphoria to horror in moments.

Tokyo Sonata takes the longing I have (and I imagine, a lot of others have) felt about wanting to be elsewhere but equally realising that elsewhere is a new world and that there's too much baggage to leave behind. How can I start over again? The answer is that no matter if you go about doing something radically different, there really isn't a true reset button. Unless you perhaps have permanent retrograde amnesia .. but I wouldn't wish that on anybody.