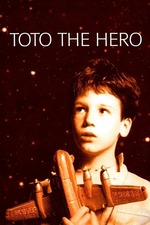 I was looking forward to catching Jaco Van Dormael's first film after enjoying his most known (Mr Nobody) eons ago.

The title seems to suggest this is some friendly child's picture. If you like tones of incest and children setting houses on fire in your children's story, then this flick is indeed for you!

An old man has a capital V for vendetta against another old man for "stealing" his life (they swapped families as infants).

It's not that he was without pity, but he was contemptible in his self-pity. Add to that an ending I found more offensive than not.

Toto the Hero is out to prove there can be such a thing as too much whimsy.

One of the highlights is a catchy French song precursor to the inclusion of Mr Sandman in Mr Nobody. (catch it here)