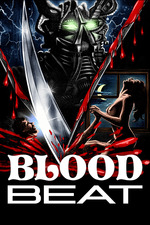 "Your music makes me want to pee."

As I was watching Blood Beat, drawn in by certain scenes and floating into some sort of sweaty dream state, I found myself thinking that, despite its aesthetic and thematic differences, this was the first American film I'd seen that evoked a similar trance-like quality to the work of Jean Rollin. Then flicking over to the blu-ray's extras, I find that the director, Fabrice A. Zaphiratos, is in fact a French guy. No surprises this was made by a European. Blood Beat doesn't care about plot. It barely cares about connecting its scenes together in any kind of logical manner. It is entirely involved in the now, focused on small moments rather than the big picture. A character dies, other characters panic, then seconds later are back to normal life. This will (understandably) infuriate some, and delight others (me) with its bizarre tone and focus of pure, unfettered imagery. A shot of a man riding a horse intercut with his crying adult son... sad synth throbbing over the top. Murder sequences madly cutting between death and masturbation. Lengthy, strange scenes of nothingness set to classical tunes. A dog drifting across an empty landscape. I also liked the film's oddly homely moments that, glowing animated light and sword wielding samurai ghost aside, struck me as very real—a guy hanging out with his dog in bed, quiet games of Monopoly, mum drifting off into her own world, rambling dialogue. Blood Beat exists on its own plane, abiding by its own rules of logic. Tread with caution. If you go in seeking coherence from a film that connects a samurai ghost with orgasms, you might find yourself with a pounding headache.