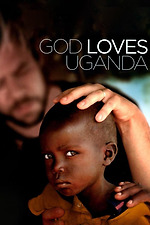 God Loves Uganda is a distressing account of the shocking influence American evangelical conservatives have imposed upon Uganda. Their brainwashing preaching, given the stamp of approval by George W. Bush, has fostered a culture of homophobia, hatred, and a political system trapped by right-wing agendas. Director Roger Ross Williams takes the smart approach of allowing the misguided missionary minions of Lou Engle to speak for themselves, exposing the fraud and terror of their campaign. LGBT rights supporter and clergyman Bishop Christopher Senyonjo is a relieving voice of sanity throughout the film, and Reverend Kapya Kaoma, who has fled to America fearing for his life after speaking out against the Christian right-wing, acts as the film's narrator, setting the scene and laying out the troubling reality of what America has brought to Uganda.