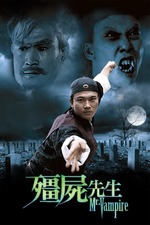 I'm a big fan of supernatural Hong Kong comedies, though, I must admit, the comedy is often incredibly cringe-worthy. Mr. Vampire is one of the few offerings from the genre that succeeds in being legitimately funny. It also works as a horror film, and even throws in a bit of action for good measure. Its success is helped by a speedy pace, solid choreography, and a talented cast. Lam Ching-Ying is a great lead and Pauline Wong is always a welcome addition to any 80s Hong Konger, but it's the late Ricky Hui that steals the show. Hui plays a goofy sidekick to Lam Ching-Ying in what could have easily been a throwaway role. Thankfully, Hui injects brilliant comic timing and heart into his performance. Mr. Vampire is strung together by a threadbare plot and is really more of a collection of scenes rather than a cohesive narrative, but it builds to an incredible enjoyable (and abrupt) ending and never for one moment is boring. It's easy to see why this is such a hugely influential film.

We Are the Best!