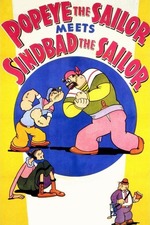 I remember watching quite a bit of Popeye as a kid. I'm not sure if I ever loved it though. I was slightly terrified of both Bluto and Popeye with their intense masculinity, violent obsession with Olive Oyl, and the unsettling acrobatics they performed with their muscles. Watching Popeye the Sailor Meets Sindbad the Sailor as an adult, I can appreciate the staggering artistry and creativity behind its animation. The 3D set backdrops are jaw-dropping. The detail to movement perfectly captures the personality of its characters. And its more absurd moments are truly inspiring. I even find it funnier as an adult. Popeye's relentless mumbling is hysterical, and Wimpy's background antics are fantastic. I can also see why this freaked me out as a kid. No matter how silly it gets, there's a meatiness to its punches, and those punches are pretty much nonstop. Bluto slaps around lions. Olive Oyl gets thrown against a wall. A two-headed monster pummels Popeye. It's insane, but still vicious. Still, all this adds to its wild energy. A real masterwork of animation.