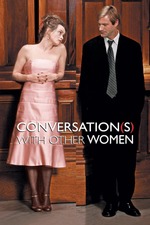 Conversations with Other Women

However, does this movie's incredible final shot make up for the lack of drama in the story? Honestly a little.