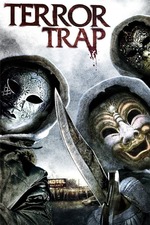 When a couple are involved in a crash and their car is wrecked, and the local Police officer takes them to a local motel to stay the night, they soon discover that things are not as they seem.

Here we have a low budget horror movie that would appear to have spent most of it's cash on two B-List actors and left nothing for any other part of the movie. The story steals a majority of it's plot elements from all the other torture porn movies you have seen (Vacancy, Hostel, etc.) and the original ideas that are there make absolutely no sense whatsoever. The production values are mixed, as the sequences with the main couple are very well handled, but the sequences of the 'audience' watching look like they were added in at the last moment and shot on a home video with a few mates. A majority of the gore is off-screen and all you get to see is a couple of cuts and a few naked chicks. The acting is all over the place, from the completely wooden to they totally overt the top, but it was good to see Jeff Fahey being quite psychotic, and a special mention must go to Michael Madsen as I could not actually work out what is what actually doing in the film, but he did it very well. All in all this is a film that tried to have some good ideas, but seemed to fall at every hurdle. There are many other similar movies out there and all of them are a lot better.