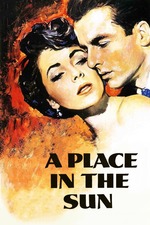 There’s an excellent shot of Montgomery Clift working in the rooms he’s renting — outside, a neon sign reading “VICKERS” flashes incessantly, inside there’s a “teach yourself high school” book and a painting of Ophelia. Stevens sums up the entire plot of the movie in a few objects.

Despite its tendency to veer towards melodrama and a shaky, montage-like beginning and ending courtroom scene, plus an irredeemable protagonist, there’s something so magnetic about Taylor and Clift’s performances, and even Shelley Winters’s. Taylor drives past a leather jacket-clad Clift in her expensive convertible, then there’s the superb scene of them crossing paths at his uncle’s house (she enters behind him, deep focus and unmissable), then brief glimpses of her in newspapers or driving about in her car. They’re both so inhumanly beautiful that it almost seems impossible that they would ever officially meet or even share the same space for more than a minute, but then they do and it’s glorious. Every scene with them, Clift doing trick shots on a pool table or their beautiful faces pressed together while kissing to Franz Waxman's brilliant score, is so exquisite you can barely watch. Even worse, it’s impossible to stop the tragedy of what was about to happen to the two of them in real life from seeping into the movie.