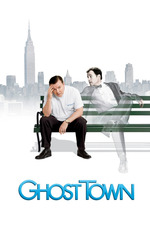 all right i went into this pretty sure i wouldn't like it but my god did it surpass my expectations. that's right folks, ghost town (2008) went zooming past mild-to-severe irritation & slam dunked itself right into the bin of contempt & hatred. i identified more with the dead, rotting prop mummy that was in the background of like three scenes than i did with the protagonist and his rubbish scroogeian narrative. why the hell does a movie that is so obviously aware of how its lead character is a gigantic dickhead want you to laugh at said protagonist actively being a gigantic dickhead while simultaneously touting some kind of half-assed narrative intent to alter said gigantic dickhead?????????????? why?????????????

anyway, i think we all know that the real question here is why did i expect anything even remotely self-aware from a ricky gervais movie? or indeed anything good at all?? i don't know why the f he thinks negativity & cruelty & racism & every other pejorative or offensive thing under the sun is a cool & hip place to source "comedy" from but it is EXHAUSTING. is there are more tiresome man on the planet?? (don't answer this actually because i truly would, for once in my life, prefer to live in ignorance.) anyway while i'm on a roll i have to add: these r exactly the kinds of movies that feed into the "Main Guy Deserves Woman He Was An Asshole To Because He's Slightly Less Of An Asshole Now Than He Was 90 Minutes Ago" vortex of laziness & misogyny. i'm so #tired of thinking to myself, "hang on, if this was a movie from her perspective, what would he look like? a raging egotistical git with no conception of boundaries or decency? that's another one for the pile, ladies! better snap 'em up while they'll still pretend to listen to you!" i am old and fatigued.

the sole reason i am giving this smoking crater of bullshit one star instead of negative five is téa leoni & her gay indiana jones aesthetic (cotton blouses!!!!! cutoff denim shorts!!!! hair wound up and pinned with a pencil!!!!! archaeology professor specialising in ancient egypt!!!! my dorky, history-obsessed 2007 self passed out several times while she was on screen. it was v pure.) bc that saved my life & thank god because otherwise i would be terrified Jack Of All Jackasses ricky gervais would be waiting on the other side to tell me "hey, it's okay, you're dead but guess what! life was useless anyway." whatever, my guy. blow your misreading of nietzsche a kiss from me.