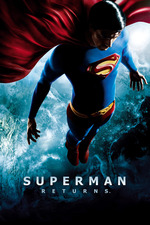 When I started this little marathon a few days ago, I knew that getting back to this one would be interesting. Standing between the old Donner films and the new Man of Steel, Returns kind of just sits there like a lame duck. A bump in the road. A lump on a log. A mysterious looking wart on the ass of Superman's film career.

But actually, I think watching the past two Superman films has kind of made me biased when it comes to this one. Returns makes parts III and IV look like the ass warts. What does that make Man of Steel look like? Well I don't know about that... I don't think I'm going to touch on that one any time soon.... At least until I see Man of Steel again. But yeah. Returns.

But I think that's only because it was a nice change of pace to see something that at least moderately resembled a Superman movie. And I liked how this film disregards III and IV in favor of offering some kind of continuation of the first two Donner films. But not so fast, Superman Returns! You can't make me forget those two films! I just watched them... And they are burned into my memory forever. This film helped ease the pain a bit. But I think in the context of the marathon I might be a little more forgiving. Because I VERY fondly remember falling asleep in the last 15 minutes of this film in the theaters. And I know my opinion hasn't really changed that much. But this film tries. Its not a cheap cash in or soulless sequel. Its little heart is beating and tries desperately to capture the Donner films lighting in a bottle and use it here. But it makes the modern jump very awkwardly and at time just doesn't know what the fuck it wants to be. Does it want to be a big budget action film? Does it want to be a family drama? Does it want to be a soap opera with Superman in it? I surely don't know. All I know is that its very dry, and often just plain not interesting. Superman's actual return to Metropolis is overshadowed by Lex Luthor's evil scheme exposition and Brandon Routh's return to Earth is as epic and rewarding as a wet sock hitting a concrete floor. It kind of just happens and eventually we are kinda just like "oh yeah, that's supposed to be Superman...."

Those words can kind of sum up this experience.

After a dizzying opening that is heavily reminiscent of the Donner films and with the John Williams score trumpeting in the background, it almost gets a primal urge pumping through your veins. And then the film kind of fizzles out from there. I will admit, this movie had some great parts. The airplane rescue on the baseball field was classic Superman and Routh's cheesy line about flying channels a lot of Christopher Reeve. The climax is also a sight for sore eyes and features a lot of big, yet clean set pieces that let superman showcase his strengths without going full retard. The action in this film was decent enough but its spaced out far too much and the expository stuff in-between is simply weak. It was a weak script, there were weak performances (with the exception of Spacey and maybe even Routh) and certain small things from the Donner films like the clumsy Clark/Lois relationship are either missing entirely or are done poorly. I didn't particularly like Lois Lane and the family drama between her, Richard and Supes was dull and a bit silly. I know Superman had to regain some ground here and there after being away for 5 years, but I think it could've been handled a lot better. And speaking of 5 years, this film acts like its a direct continuation of the first two films but it never really mentions why exactly they repeated the same lines and duplicated entire scenes. I couldn't tell if this was a reboot or a sequel and honestly it was kind of confusing separating what this film assumed happened or didn't happen in the old films. It was just weird.

Superman Returns in an unnecessarily difficult film. Not in the sense that what is happening is difficult per-se but because its just kind of hard to tell what exactly this film wanted to be, or replicate. It was an odd mixture of new and old with a heavy dose of the "zzzzzzzzzzzzzz's." Its kind of a lame experience and even though Routh does a lot of the same heavy lifting, cheesy line spitting, and simple heroics that Reeve did, it lacks the human element and grand sense of adventure that Donner effortlessly replicated from the comic books. This is a Superman that stands tall, acts heroic and doesn't waste time being sad; just like we need him to. But unfortunately he is saving people we don't care about in a dry world. Its like the good things about the Donner films and the bad things about Man of Steel collided, fought, and then made sweet love afterwards, creating some kind of Frankenstein's monster of a love child. If that is as confusing as it sounds, good. Lets keep it that way.

Its much easier to say it was this films fault, but maybe its actually us. Maybe its is who don't know what we want in a Superman film. Maybe. Cause this movie wasn't all that bad. It was weak, but it got some important parts right despite stumbling along the way.

Maybe WE were wrong.