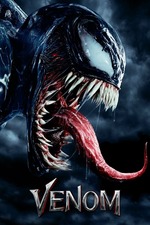 It was terribly foolish of me to think that this antiquated paean to the crummy subset of '90s superhero fandom would transcend its corporate purpose and contain something resembling a human voice.

There are glimpses of ambition and authenticity, though. Fleischer's initial flirtation with the idea of Venom as a thematic extension of Eddie Brock's clumsy and, to an extent, toxic brand of machismo which directly feeds his questionable journalistic ethos is at least intriguing enough to warrant hope.

Alas, the rest of the film feels less like an inspired motion picture than a studio mandate.

The opening montage, which introduces Brock as an intrepid investigative journalist coasting on scruffy Vice charm, is indeed chock-full of verbal references to real-life controversies. However, it is nothing but a desperate effort to co-opt topical iconography in order to come across as "mature" -- something that Christopher Nolan did and largely got away with in The Dark Knight Rises, also starring Tom Hardy.

Hardy's erratic performance is at least bizarre enough to be remotely amusing. That said, it's important to acknowledge that the character of Eddie Brock is not a single specific personality, but rather an amalgamation of wish fulfillments specifically designed to cater to an obsolete idea of masculine comic book readership. Thus, the premise of Venom -- a traditional plot device by nature whose sole purpose is to become the foil of Brock's psyche -- is ultimately irrelevant due to the glaring absence of protagonistic personalities and values which it's supposed to interrogate and occasionally contradict.

Venom-puppy is the only thing going for this future bargain bin staple.