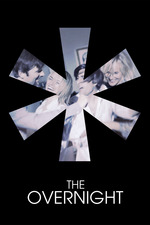 Okay, I don't know what genre this film should be classified under. There are elements of comedy, drama, thriller and, *shudder* mumblecore, but I still enjoyed The Overnight, even if it does have some flaws to it.

The performances from our four leads are great. Jason Schwartzman showed me once again why he can be so easy to hate, yet so easy to love, as he can shift between being sympathetic and annoying/creepy in a heartbeat, which did work to his advantage here. I also liked the direction, mostly because of the use of color grading, as it further enhanced the uncanny atmosphere throughout the film. The writing should also be praised, as it managed to explore some of the problems of adulthood, be it of sexual character or relate to one's soul searching and self-fulfilment, were tackled in a very entertaining and also very disturbing manner. It kind of reminded of how dark one's everyday life can actually become at times, which is kind of weird considering that this film used pictures of rectums as symbolism and foreshadowing!

The pacing was a bit too slow for my liking. While I did like the writing in terms of the plot, I can't say the same about the characters and their dialogue. Sometimes the film felt like it lingered far too long on various scenes, and it didn't help that the dialogue could feel a bit too navel-gazing and repetitive for its own good. I know these characters are supposed to have suppressed mid-life crises, but I felt that the film overplayed this aspect at times to the degree where it could get hard for me to care about the characters, despite some good performances by the actors. Besides that, while the ending did come as a surprise to me, I did feel that it was a bit rushed and could have used some better build-up, as it seemed too sudden in regards to the developments that had occurred up until then. The film also seemed inconsistent about its tone, as it wanted to be both comedy and psychological thriller, and I think it didn't balance those elements well enough, as the quirky comedy outweighed the potential for an exploration of the psychological horror regarding its subject matter. I would definitely have liked this film more if it had been slightly darker than the case eventually was.

In conclusion, The Overnight took me a bit by surprise with its dark humor and great direction, but I still kind of felt that it could have been better than it turned out to be.