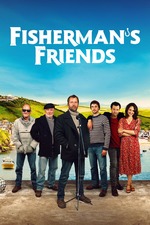 The Cornish Tourist Board won’t do too badly out of this - not that they need any help - as the photography is worth the admission price alone.

Pretty scenery, though, is not enough to sustain a two hour film and I didn’t think I’d make it through the first act, given the city boys’ tooth-grindingly awful acting which is as wooden as the boats in the harbour.

The (true-ish) story rides the lines of contrivance as surely as a professional surfer takes on a breaking wave and aside from the toe-tapping shanties, the musical cues are as clunky as the fishermen’s boots. Predictable? Yes. But thirty minutes in, with the boringly familiar British romcom checkboxes ticked off, the real story begins and it becomes far more than the tale of a fish out of water.

With my annoyances dispatched back to the big smoke, we learn about the fisherman and their friends and here I became hooked into a tale of friendship, loyalty and finding one's true purpose.

Charming and life-affirming; it’s not Local Hero but, then again, what is?